Method: The cholangiocarcinoma cell line, CL-6, was treated with each compound for 3 and 6 hours, and the proteins from both intra- and extracellular components were extracted. LC-MS/MS was applied following the separation of the extract proteins by SDS-PAGE and digestion with trypsin. Signaling pathways and protein expression were analyzed by MASCOT and STITCH software.

Conclusion: In conclusion, a total of 17 proteins associated with four cell signaling pathways that could be potential molecular targets of anticholangiocarcinoma action of atractylodin and β-eudesmol were identified through the application of proteomics approach.

The accumulation of chemical constituents of some medicinal plants, such as Paeonia ostii T. Hong et J. X. Zhang, Houpoëa officinalis (Rehder and E. H. Wilson) N. H. Xia and C. Y. Wu. and Atractylodes lancea (Thunb.) DC, can precipitate on the surface and form frosts after natural or artificial intervention. The characteristics of these three medicinal plants and their frosts were analyzed by light microscope, polarizing microscope, stereomicroscope, and metalloscope. The results of ordinary Raman of P. ostii and H. officinalis showed that the frosts of P. ostii matched paeonol, while that of H. officinalis matched magnolol and honokiol. In P. ostii and its frost, 19 peaks were identified by UPLC-Q/TOF-MS, and the main component was paeonol. Eleven components were identified in H. officinalis and its frosts, and the main components were magnolol and honokiol. A. lancea and its frosts were analyzed by gas chromatography-mass spectrometry (GC-MS), 21 were identified, and its main components were hinesol and β-eudesmol. These three medicinal plants accumulate compounds and precipitate frosts on the surface. The results show that the components of the frosts provide a basis for quality evaluation and research on similar medicinal plants, and reveals the scientific connotation of “taking the medicinal materials’ precipitated frosts as the best” of P. ostii, H. officinalis, and A. lancea, to some extent.

Five eudesmane-type sesquiterpene glycosides, named sonneratiosides A-E (1-5), were isolated from the leaves of Sonneratia alba (Lythraceae). The aglycone of sonneratioside A was identified as cryptomeridiol also known as proximadiol. X-ray crystallographic analysis of sonneratioside A confirmed its structure and its absolute stereochemistry. Eudesmol β-D-glucopyranoside (6) was also isolated from nature for the first time. The tyrosinase inhibitory activity was assayed for the new compounds together with seven known compounds. Among them, arbutin (12) showed the expected activity and luteolin 7-O-rutinoside (10) showed comparable activity to arbutin.

Antiangiogenic activity of beta-eudesmol in vitro and in vivo. PUMID/DOI：15840394 Eur J Pharmacol. 2005 Apr 11;512(2-3):105-15. Abnormal angiogenesis is implicated in various diseases including cancer and diabetic retinopathy. In this study, we examined the effect of beta-Eudesmol, a sesquiterpenoid alcohol isolated from Atractylodes lancea rhizome, on angiogenesis in vitro and in vivo. Proliferation of porcine brain microvascular endothelial cells and human umbilical vein endothelial cells (HUVEC) was inhibited by beta-Eudesmol (50-100 microM). It also inhibited the HUVEC migration stimulated by basic fibroblast growth factor (bFGF) and the tube formation by HUVEC in Matrigel. beta-Eudesmol (100 microM) blocked the phosphorylation of extracellular signal-regulated kinase (ERK) 1/2 induced by bFGF or vascular endothelial growth factor. Furthermore, beta-Eudesmol significantly inhibited angiogenesis in subcutaneously implanted Matrigel plugs in mice and in adjuvant-induced granuloma in mice. These results indicate that beta-Eudesmol inhibits angiogenesis, at least in part, through the blockade of the ERK signaling pathway. We considered that beta-Eudesmol may aid the development of drugs to treat angiogenic diseases. Beta-eudesmol suppresses tumour growth through inhibition of tumour neovascularisation and tumour cell proliferation. PUMID/DOI：18253884 J Asian Nat Prod Res. 2008 Jan-Feb;10(1-2):159-67. In the present study, we investigated the potential anti-angiogenic mechanism and anti-tumour activity of beta-Eudesmol using in vitro and in vivo experimental models. Proliferation of human umbilical vein endothelial cells (HUVEC) stimulated with vascular endothelial growth factor (VEGF, 30 ng/ml) and basic fibroblast growth factor (bFGF, 30 ng/ml) was significantly inhibited by beta-Eudesmol (50-100 microM). beta-Eudesmol (100 microM) also blocked the phosphorylation of cAMP response element binding protein (CREB) induced by VEGF (30 ng/ml) in HUVEC. beta-Eudesmol (10-100 microM) inhibited proliferation of HeLa, SGC-7901, and BEL-7402 tumour cells in a time- and dose-dependent manner. Moreover, beta-Eudesmol treatment (2.5-5 mg/kg) significantly inhibited growth of H(22) and S(180) mouse tumour in vivo. These results indicated that beta-Eudesmol inhibited angiogenesis by suppressing CREB activation in growth factor signalling pathway. This is the first study to demonstrate that beta-Eudesmol is an inhibitor of tumour growth. β-Eudesmol induces JNK-dependent apoptosis through the mitochondrial pathway in HL60 cells. PUMID/DOI：22585533 Phytother Res. 2013 Mar;27(3):338-43. beta-Eudesmol, a natural sesquiterpenol present in a variety of Chinese herbs, is known to inhibit the proliferation of human tumor cells. However, the molecular mechanisms of the effect of beta-Eudesmol, on human tumor cells are unknown. In the present study, we report the cytotoxic effect of β-eudesmol on the human leukemia HL60 cells and its molecular mechanisms. The cytotoxic effect of β-eudesmol on HL60 cells was associated with apoptosis, which was characterized by the presence of DNA fragmentation. beta-Eudesmol-induced apoptosis was accompanied by cleavage of caspase-3, caspase-9, and poly (ADP-ribose) polymerase; downregulation of Bcl-2 expression; release of cytochrome c from mitochondria; and decrease in mitochondrial membrane potential (MMP). Activation of c-Jun N-terminal kinases (JNK) mitogen-activated protein kinases was observed in beta-Eudesmol-treated HL60 cells, and the inhibitor of JNK blocked the beta-Eudesmol-induced apoptosis, downregulation of Bcl-2, and the loss of MMP. These data suggest that beta-Eudesmol induces apoptosis in HL60 cells via the mitochondrial apoptotic pathway, which is controlled through JNK signaling. 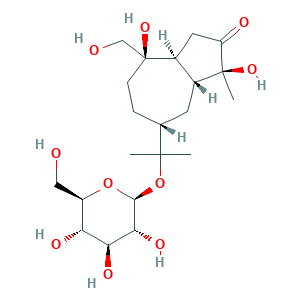 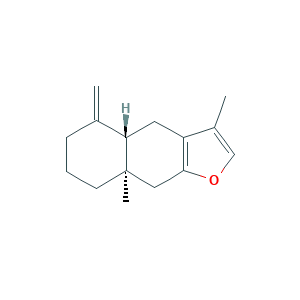 Atractylon Item Number: BD-D1212 Specification : For Reference Standard and R&D, Not for Human Use Directly.CAS: 6989-21-5 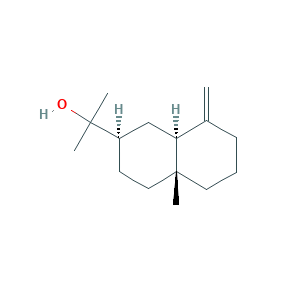