Background: Our previous study reveals that total rough extract of Radix Scrophulariae has a beneficial effect on ventricular remodeling.
Hypothesis: After carrying out a series of preliminary experiments, we speculated that angoroside C may be the effective agent.
Study design: After oral administration, the effect of angoroside C on ventricular remodeling was evaluated by using a pressure-overloaded rat model, some related indexes were detected in vivo.
Methods: A model of pressure overloaded ventricular remodeling was produced by abdominal aortic constriction (AAC) in rats. The sham-operated rats underwent an identical surgical procedure except for AAC. AAC rats were randomly divided into five groups: model control group, three angoroside C treated groups (7.5, 15 and 30 mg·kg(-1)) and captopril treated group (40 mg·kg(-1)). The rats were orally administered with the corresponding drugs or drinking water for 4 weeks. The levels of blood pressure (BP), left ventricular weight index (LVWI) and heart weight index (HWI) were detected. Myocardium tissue was stained with hematoxylin and eosin or picric acid/sirius red for cardiomyocyte cross-section area or collagen content measurements respectively. The concentrations of angiotensin Ⅱ (Ang Ⅱ), hydroxyproline (Hyp), matrix metalloproteinase 2 (MMP-2), MMP-9 and tissue inhibitor of metalloproteinase-1 (TIMP-1) in myocardium or serum were determined. Real-time RT-PCR was performed to detect the mRNA expressions of endothelin 1 (ET-1), transforming growth factor β1 (TGF-β1).
Results: Angoroside C significantly reduced the BP, LVWI and HWI, decreased the content of Ang Ⅱ, Hyp, diminished cross sectional area of cardiomyocytes and ameliorated collagen deposition. Additionally, it markedly reduced collagen I and III expressions and regulated matrix metalloproteinase-2, 9 and inhibitors of metalloproteinase expressions. Angoroside C also down regulated the gene expressions of ET-1 and TGF-β1mRNA in myocardium.
Conclusion: Angoroside C has beneficial effects against ventricular remodeling. The mechanism is likely to be related to decreasing the level of Ang Ⅱ, attenuating the mRNA expressions of ET-1 and TGF-β1.

Angoroside C is a phenylpropanoid glycoside compound isolated from the dried root of Scrophularia ningpoensis Hemsl., which possesses the effects of preventing ventricular remodeling, reducing pulmonary oedema, and reducing blood pressure, as well as having the properties of anti-platelet aggregation, hepatoprotection and anti-nephritis, etc. However, few investigations have been conducted on the absorption, distribution, metabolism, and excretion (ADME) study of angoroside C. Thus, a fast ultra-high performance liquid chromatography-tandem quadrupole mass spectrometry (UPLC-MS/MS) method was established for the determination of angoroside C and its metabolite ferulic acid in rat plasma and tissue homogenate. The two analytes were extracted from the biosamples using a simple protein precipitation with acetonitrile. The developed method was validated and successfully applied to the pharmacokinetics, bioavailability and tissue distribution study after the intragastric administration of angoroside C (100 mg/kg) or the intravenous administration of angoroside C (5 mg/kg), respectively. The results showed that angoroside C can be absorbed extremely quickly (T max = 15 min), can be eliminated very rapidly (t 1/2 = 1.26 h), and its oral bioavailability is only about 2.1%. Furthermore, angoroside C was extensively distributed in all main organs (liver, heart, spleen, lung, kidney, and brain), and the highest concentration was detected in the lung 15 min after oral administration. This paper also indicated that angoroside C could be converted to the active metabolite ferulic acid in vivo. The maximum concentrations of ferulic acid in the kidney occurred at 6 h after oral administration. In summary, this study explored some of the pharmacokinetic characteristics of angoroside C in vivo, and the data produced could provide a basis for the further investigation of angoroside C.

Sibirioside A and angoroside C are two important phenylpropanoid glycosides of the traditional Chinese medicine Scrophulariae Radix. High performance liquid chromatography, coupled with an ion trap time-of-flight multistage mass spectrometry equipped with electrospray ionization source (HPLC-ESI-IT-TOF-MSn), was applied to the profile and we identified the metabolites of sibirioside A and angoroside C in vivo in rats. A total of four metabolites of sibirioside A were identified: SM1, SM2 and SM3 which were known as new compounds. A total of 25 metabolites were detected for angoroside C: AM4, AM5, AM6, AM7, AM16, AM17, AM20, AM21, AM22, AM23 and AM25 which were identified to be new compounds. The main metabolic reactions were hydrolysis, reduction, hydroxylation, methylation, sulfation, and gluconylation. The prototype of sibirioside A was widely distributed in tissues found in the heart, liver, spleen, lung, kidney, stomach and small intestine of rats, and mainly distributed in the stomach, small intestine, kidney and liver. But for angoroside C, nothing was found in the viscera except the stomach and small intestine. The metabolites of sibirioside A were mainly eliminated from feces, while it was urine for the metabolites of angoroside C. Furthermore, 19 metabolites were likely to have bioactivities based on the ‘PharmMapper’ analysis, which roughly matched the known pharmacological activities of Scrophulariae Radix (SR) and the prototypes. One of the main pharmacological activities of SR in traditional Chinese medicine is anti-diabetes, and the predicted results showed that SM1, SM2, SM3, AM2, AM4, AM5, AM6, AM9, AM10, AM11, AM12, AM13, AM15, AM18, AM19, AM24, and AM25 might be used to cure diabetes. These findings provide a reference for studying the metabolism, distribution and pharmacological actions of phenylpropanoid glycosides in vivo. 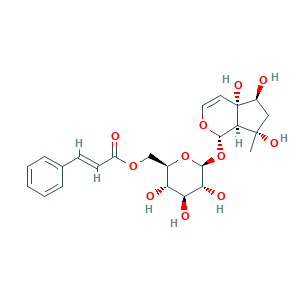 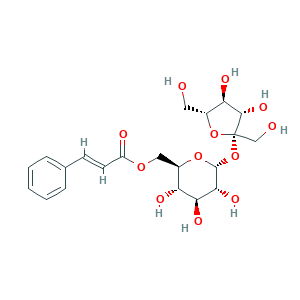 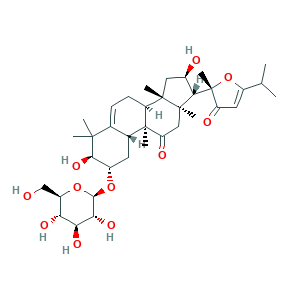 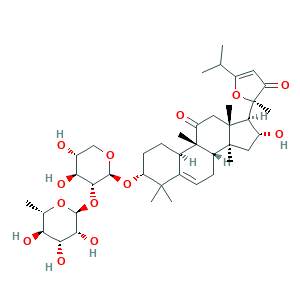 Picfeltarraenin IA Item Number: BF-P4017 Specification : For Reference Standard and R&D, Not for Human Use Directly.CAS: 97230-47-2 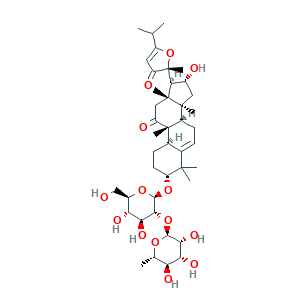 Picfeltarraenin IB Item Number: BF-P4011 Specification : For Reference Standard and R&D, Not for Human Use Directly.CAS: 97230-46-1