Microorganism degradation is efficient to remove the steroid hormones like 17β-estradiol (E2); but their degradation mechanism and metabolic network to these chemicals are still not very clear. Here the global responses of the estrogen-degradation strain Pseudomonas putida SJTE-1 to 17β-estradiol and glucose were analyzed and compared using the iTRAQ (isobaric tags for relative and absolute quantization) strategy combined with LC-MS/MS (liquid chromatography-tandem mass spectrometry). 78 proteins were identified with significant changes in expression; 45 proteins and 33 proteins were up-regulated and down-regulated, respectively. These proteins were mainly involved in the processes of stress response, energy metabolism, transportation, chemotaxis and cell motility, and carbon metabolism, considered probably responding to 17β-estradiol and playing a role in its metabolism. The up-regulated proteins in electron transfer, energy generation and transport systems were thought crucial for efficient uptake, translocation and transformation of 17β-estradiol. The over-expression of carbon metabolism proteins indicated cells may activate related pathway members to utilize 17β-estradiol. Meanwhile, proteins functioning in glucose capture and metabolism were mostly down-regulated. These findings provide important clues to reveal the 17β-estradiol degradation mechanism in P. putida and promote its bioremediation applications.

The first committed step of fatty acid and polyketides biosynthesis, the biotin-dependent carboxylation of an acyl-CoA, is catalyzed by acyl-CoA carboxylases (ACCases) such as acetyl-CoA carboxylase (ACC) and propionyl-CoA carboxylase (PCC). ACC and PCC in Streptomyces coelicolor are homologues multisubunit complexes that can carboxylate different short chain acyl-CoAs. While ACC is able to carboxylate acetyl-, propionyl-, or butyryl-CoA with approximately the same specificity, PCC only recognizes propionyl- and butyryl-CoA as substrates. How ACC and PCC have such different specificities towards these substrates is only partially understood. To further understand the molecular basis of how the active site residues can modulate the substrate recognition, we mutated D422, N80, R456 and R457 of PccB, the catalytic beta subunit of PCC. The crystal structures of six PccB mutants and the wild type crystal structure were compared systematically to establish the sequence-structure-function relationship that correlates the observed substrate specificity towards acetyl-, propionyl- and butyryl-CoA with active site geometry. The experimental data confirmed that D422 is a key determinant of substrate specificity, influencing not only the active site properties but further altering protein stability and causing long-range conformational changes. Mutations of N80, R456 and R457 lead to variations in the quaternary structure of the beta subunit and to a concomitant loss of enzyme activity, indicating the importance of these residues in maintaining the active protein conformation as well as a critical role in substrate binding.

Meghalaya, (in India), in the region of the mega-biodiversity hotspots, is home to a plethora of wild mushrooms. The present study concerns the exploration of the order Agaricales, which includes rare gilled mushrooms considered endangered under IUCN A4c criteria, due to the declining habitat. Electron microscopy of the gill sections revealed an abundance of clamp connections, hyphal cell walls, cystidia, and basidia. This rare species which belongs to the family Cyphellaceae, exhibits morphological and molecular differences from the Cyphella spp. Phylogenetic analysis revealed that it formed a clade under the genus Campanophyllum of the order Agaricales, confirmed by both Neighbor Joining (NJ) and Bayesian phylogenetic analysis. Being nutritionally potent along with its efficient antioxidant value, the fungal extract shows significant rise of two-fold in the antimicrobial activity along with the commercial antibiotics. The compound, Phenol, 2, 4-bis (1, 1-Dimethylethyl) (2, 4-DTBP) showed in ample range in the fungal extract along with aliphatic hydrocarbons, terpene, alcohol and volatile organic compounds on further characterization in GCMS. The present study indicates the endangered Campanophyllum proboscideum could be a rich source of natural antioxidants and an effective pharmaceutical agent. 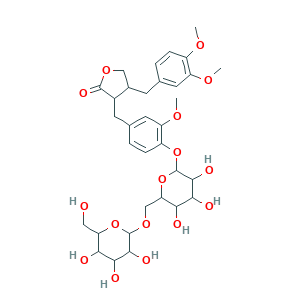 Arctigenin 4′-O-β-gentiobioside Item Number: BD-P0846 Specification : For Reference Standard and R&D, Not for Human Use Directly.CAS: 41682-24-0 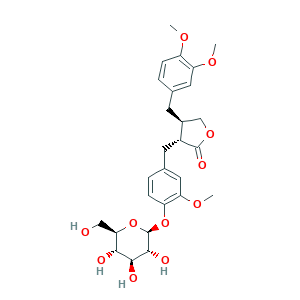 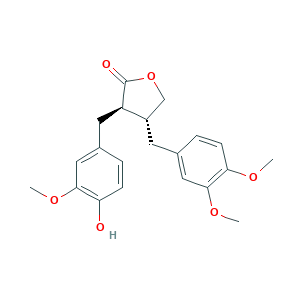 Arctigenin Item Number: BF-A3022 Specification : For Reference Standard and R&D, Not for Human Use Directly.CAS: 7770-78-7