Two major obstacles for successful cancer treatment are the toxicity of cytostatics and the development of drug resistance in cancer cells during chemotherapy. Acquired or intrinsic drug resistance is responsible for almost 90% of treatment failure. For this reason, there is an urgent need for new anticancer drugs with improved efficacy against cancer cells, and with less toxicity on normal cells. There are impressive examples demonstrating the success of natural plant compounds to fight cancer, such as Vinca alkaloids, taxanes, and anthracyclines. Artesunic acid (ARTA), a drug for malaria treatment, also exerts cytotoxic activity towards cancer cells. Multidrug resistance often results from drug efflux pumps (ABC-transporters) that reduce intracellular drug levels. Hence, it would be interesting to know, whether ARTA could overcome drug resistance of tumor cells, and in what way ABC-transporters are involved. Different derivatives showing improved features concerning cytotoxicity and pharmacokinetic behavior have been developed. Considering both drug sensitivity and resistance, we chose a sensitive and a doxorubicin-resistant leukemia cell line and determined the killing effect of ARTA on these cells. Molecular docking and doxorubicin efflux assays were performed to investigate the interaction of the derivatives with P-glycoprotein. Using single-cell gel electrophoresis (alkaline comet assay), we showed that the derivatives of ARTA induce DNA breakage and accordingly programmed cell death, which represents a promising strategy in cancer treatment. ARTA activated apoptosis in cancer cells by the iron-mediated generation of reactive oxygen species (ROS). In conclusion, ARTA derivatives may bear the potential to be further developed as anticancer drugs.

Generation of dimers, trimers and dendrimers of bioactive compounds is an approach that has recently been developed for the discovery of new potent drug candidates. Herein, we present the synthesis of new artemisinin-derived dimers and dendrimers and investigate their action against malaria parasite Plasmodium falciparum 3D7 strain and human cytomegalovirus (HCMV). Dimer 7 was the most active compound (EC50 1.4 nm) in terms of antimalarial efficacy and was even more effective than the standard drugs dihydroartemisinin (EC50 2.4 nm), artesunic acid (EC50 8.9 nm) and chloroquine (EC50 9.8 nm). Trimer 4 stood out as the most active agent against HCMV in vitro replication and exerted an EC50 value of 0.026 μm, representing an even higher activity than the two reference drugs ganciclovir (EC50 2.60 μm) and artesunic acid (EC50 5.41 μm). In addition, artemisinin-derived dimer 13 and trimer 15 were for the first time both immobilized on TOYOPEARL AF-Amino-650M beads and used for mass spectrometry-based target identification experiments using total lysates of HCMV-infected primary human fibroblasts. Two major groups of novel target candidates, namely cytoskeletal and mitochondrial proteins were obtained. Two putatively compound-binding viral proteins, namely major capsid protein (MCP) and envelope glycoprotein pUL132, which are both essential for HCMV replication, were identified.

Synthesis of Artemisinin-Derived Dimers, Trimers and Dendrimers: Investigation of Their Antimalarial and Antiviral Activities Including Putative Mechanisms of Action.

Artesunic acid (ASH), an antimalarial drug, has low oral bioavailability due to its low aqueous solubility. To overcome this problem, artesunate (AS) was intercalated into zinc basic salt (ZBS) via co-precipitation. AS was immobilized with a tilted double layer arrangement, which was also confirmed by XRD and 1-D electron density mapping. In order to decrease the release rate of AS under gastrointestinal conditions and to simultaneously increase the release rate of AS under intestinal conditions, ZBS-AS was coated with EUDRAGIT L100 (ZBS-AS-L100). Finally, we performed an in-vivo pharmacokinetic study to compare the oral bioavailability of AS of ZBS-AS-L100 with that of ASH. Surprisingly, it was found that the former is 5.5 times greater than the latter due to an enhanced solubility of AS thanks to the ternary hybridization with ZBS and EUDRAGIT L100. Therefore, the present ZBS-AS-L100 system has a great potential as a novel antimalarial drug formulation with pH selectivity and enhanced bioavailability.

Artesunate is an inhibitor of both STAT-3 and exported protein 1 (EXP1). 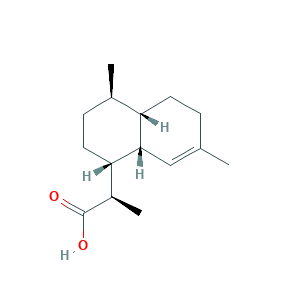 Dihydroartemisinic acid Item Number: BD-D1097 Specification : For Reference Standard and R&D, Not for Human Use Directly.CAS: 85031-59-0 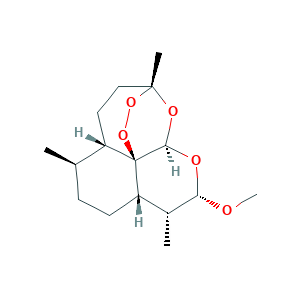 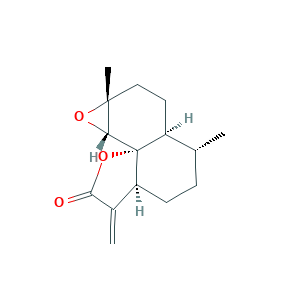 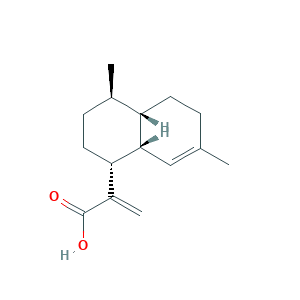 Artemisinic acid Item Number: BF-A4002 Specification : For Reference Standard and R&D, Not for Human Use Directly.CAS: 80286-58-4