Angelman Syndrome (AS) is a rare neurodevelopmental disorder caused by loss of function of the maternally inherited copy of UBE3A, an imprinted gene expressed biallelically in most tissues, but expressed exclusively from the maternal allele in neurons. Active transcription of the neuron-specific long non-coding RNA (lncRNA), UBE3A-ATS, has been shown to silence paternal UBE3A. We hypothesized that alternative splicing factors RBFOX2 and RBFOX1 might mediate splicing changes and result in the transcription of UBE3A-ATS in neurons. We found that RBFOX2 and RBFOX1 both bind to UBE3A-ATS transcript in neurons, but are not required for gene expression and/or neuron-specific processing in the SNURF/SNRPN-UBE3A region. However, we found that depletion of RBFOX2 causes a proliferation phenotype in immature neural cultures, suggesting that RBFOX2 is involved in division versus differentiation decisions in iPSC-derived neural progenitors. Absence of RBFOX2 also altered the expression of some genes that are important for glutamatergic neocortical development and Wnt-Frizzled signalling in mature neuronal cultures. Our data show that while RBFOX1 and RBFOX2 do not mediate neuron-specific processing of UBE3A-ATS, these proteins play important roles in developing neurons and are not completely functionally redundant.

Until 2018, cervical cancer screening in France was an unorganized individual screening, with the exception of some pilot programs in some territories. We aimed to assess, before the implementation of organized cervical cancer screening and human papillomavirus (HPV) nonavalent vaccine introduction in the vaccination schedule in 2018, (i) the individual cervical cancer screening coverage, (ii) the management of squamous intraepithelial lesions (SIL) and (iii) the related costs. We used the Systeme National des Donnees de Sante (SNDS) (Echantillon Generaliste de Beneficiaires [EGB] and Programme de Medicalisation des systemes d’information [PMSI]) to assess the cervical screening coverage rate in France between January 1st, 2012 and December 31st, 2014, and to describe diagnostic investigations and therapeutic management of SIL in 2013. After extrapolation to the general population, a total of 10,847,814 women underwent at least one smear test over the 3-year study period, corresponding to a coverage rate of 52.4% of the women aged 25 to 64 included. In 2013, 126,095 women underwent HPV test, 327,444 women underwent colposcopy, and 9,653 underwent endocervical curettage; 31,863 had conization and 12,162 had laser ablation. Besides, 34,067 women experienced hospital stays related to management of SIL; 25,368 (74.5%) had high-grade lesions (HSIL) and 7,388 (21.7%) low-grade lesions (LSIL). Conization was the most frequent in-hospital therapeutic procedure: 89.5% (22,704) of women with an in-hospital procedure for HSIL and 64.7% (4,781) for LSIL. Mean cost of smear test, colposcopy and HPV tests were around 50€. Total cost for hospital stays in 2013 was estimated at M41€, or a mean cost of 1,211€ per woman; 76% were due to stays with HSIL. This study highlights the low coverage rate of individual cervical cancer screening and a high burden related to SIL management.

Background
Drought is a widespread limiting factor in coffee plants. It affects plant development, fruit production, bean development and consequently beverage quality. Genetic diversity for drought tolerance exists within the coffee genus. However, the molecular mechanisms underlying the adaptation of coffee plants to drought are largely unknown. In this study, we compared the molecular responses to drought in two commercial cultivars (IAPAR59, drought-tolerant and Rubi, drought-susceptible) of Coffea arabica grown in the field under control (irrigation) and drought conditions using the pyrosequencing of RNA extracted from shoot apices and analysing the expression of 38 candidate genes.

Results
Pyrosequencing from shoot apices generated a total of 34.7 Mbp and 535,544 reads enabling the identification of 43,087 clusters (41,512 contigs and 1,575 singletons). These data included 17,719 clusters (16,238 contigs and 1,575 singletons) exclusively from 454 sequencing reads, along with 25,368 hybrid clusters assembled with 454 sequences. The comparison of DNA libraries identified new candidate genes (n = 20) presenting differential expression between IAPAR59 and Rubi and/or drought conditions. Their expression was monitored in plagiotropic buds, together with those of other (n = 18) candidates genes. Under drought conditions, up-regulated expression was observed in IAPAR59 but not in Rubi for CaSTK1 (protein kinase), CaSAMT1 (SAM-dependent methyltransferase), CaSLP1 (plant development) and CaMAS1 (ABA biosynthesis). Interestingly, the expression of lipid-transfer protein (nsLTP) genes was also highly up-regulated under drought conditions in IAPAR59. This may have been related to the thicker cuticle observed on the abaxial leaf surface in IAPAR59 compared to Rubi.

Conclusions
The full transcriptome assembly of C. arabica, followed by functional annotation, enabled us to identify differentially expressed genes related to drought conditions. Using these data, candidate genes were selected and their differential expression profiles were confirmed by qPCR experiments in plagiotropic buds of IAPAR59 and Rubi under drought conditions. As regards the genes up-regulated under drought conditions, specifically in the drought-tolerant IAPAR59, several corresponded to orphan genes but also to genes coding proteins involved in signal transduction pathways, as well as ABA and lipid metabolism, for example. The identification of these genes should help advance our understanding of the genetic determinism of drought tolerance in coffee. 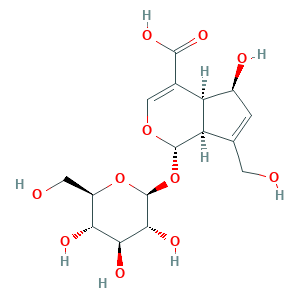 Deacetylasperulosidic acid Item Number: BD-D1262 Specification : For Reference Standard and R&D, Not for Human Use Directly.CAS: 14259-55-3 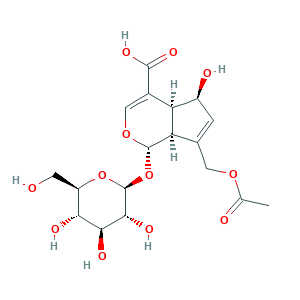 Asperulosidic acid Item Number: BD-P0830 Specification : For Reference Standard and R&D, Not for Human Use Directly.CAS: 25368-11-0 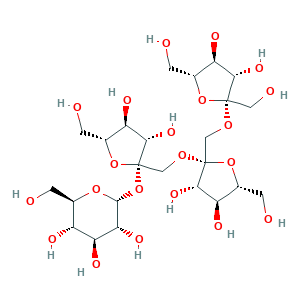