Dysregulated inflammation is increasingly considered as the main cause of many diseases on which NOD1/NF-κB pathway plays an important role. Columbianetin (CBT) is derived from the root of the Chinese herb Radix Angelicae Pubescentis for treating inflammatory diseases. Although the anti-inflammatory effect of CBT has been reported, its anti-inflammatory mechanism was poorly studied. In this study, we explored the anti-inflammatory pathway of CBT in lipopolysaccharide- (LPS-) stimulated human peripheral blood mononuclear cell (PBMC) model. Inflammatory cytokine production in culture supernatant was assessed using ELISA assay, and the possible anti-inflammatory pathway of CBT was screened using qPCR array and enrichment analysis with DAVID6.8. To further confirm the targeted pathway of CBT, we pretreated PBMC with the selective NOD1 inhibitor ML130 and then measured the protein levels of the pathway by Western blotting. The result showed that CBT effectively suppressed the expressions of TNF-α, IL-6, MCP-1, and IL-1β in a dose-dependent manner and significantly downregulated 19 out of 32 differentially expressed genes, most of which were involved in the NOD1/NF-κB pathway, and also showed that CBT remarkably inhibited LPS-induced NOD1, RIP2, and NF-κB activation. Furthermore, the inhibitory effects of CBT on NOD1/NF-κB pathways were blocked by ML130. These findings indicated that CBT inhibits the production of inflammatory cytokines induced by LPS involved in the downregulation of NOD1/NF-κB pathways.

Columbianetin-β-d-glucopyranoside (CBG) and its metabolite columbianetin (CBN) are the bioactive constituents of Angelicae pubescentis radix (APR). They exhibit the anti-platelet aggregation, anti-inflammatory and analgesic properties. The absorption, distribution, metabolism and excretion (ADME) of CBG has not been reported to date. Both high-performance liquid chromatography with fluorescence detection and ultra high-performance liquid chromatography coupled with quadrupole-time-of-flight mass spectrometry methods were developed and validated for the study of ADME of CBG. It was found that CBG could be catabolized into its active metabolite CBN in vivo. The absolute bioavailability of columbianetin-β-d-glucopyranoside was 5.63 ± 4.42%. The other co-existing constituents from the APR ethanol extract could enhance the absorption of CBG. CBG and CBN were rapidly and broadly distributed in the stomach, ovary, kidney, liver, spleen, lung, muscles, heart and brain. Higher levels of accumulation of CBG and CBN were detected in the ovary and kidney tissues. Eight metabolites of CBG were tentatively identified in blood, urine, bile and faeces of rats after oral administration of pure CBG. It was also found that CBG and CBN were mainly excreted through the faecal route. It can be concluded that the validated methods were successfully applied for absorption, distribution, metabolism and excretion study of CBG.

During a screening program for new agrochemicals from Chinese medicinal herbs, the ethanol extract of Notopterygium incisum rhizomes was found to possess strong nematicidal activity against the two species of nematodes, Bursaphelenchus xylophilus and Meloidogyne incognita. Based on bioactivity-guided fractionation, the four constituents were isolated from the ethanol extract and identified as columbianetin, falcarindiol, falcarinol, and isoimperatorin. Among the four isolated constituents, two acetylenic compounds, falcarindiol and falcarinol (2.20-12.60 μg/mL and 1.06-4.96 μg/mL, respectively) exhibited stronger nematicidal activity than two furanocoumarins, columbianetin, and isoimperatorin (21.83-103.44 μg/mL and 17.21-30.91 μg/mL, respectively) against the two species of nematodes, B. xylophilus and M. incognita. The four isolated constituents also displayed phototoxic activity against the nematodes. The results indicate that the ethanol extract of N. incisum and its four isolated constituents have potential for development into natural nematicides for control of plant-parasitic nematodes. 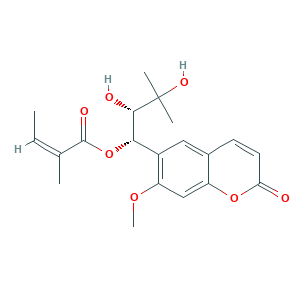 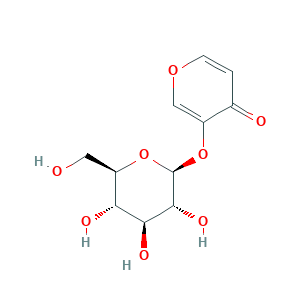 sphondin Item Number: BD-D0660 Specification : For Reference Standard and R&D, Not for Human Use Directly.CAS: 483-66-9 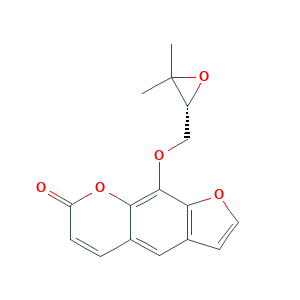 heraclenin Item Number: BD-D0497 Specification : For Reference Standard and R&D, Not for Human Use Directly.CAS: 2880-49-1 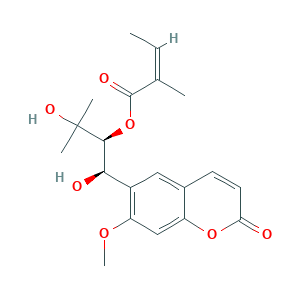 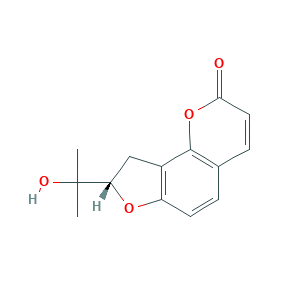 Columbianetin Item Number: BD-P0866 Specification : For Reference Standard and R&D, Not for Human Use Directly.CAS: 3804-70-4