Paclitaxel is the most frequently used therapy regimen for triple‑negative breast cancer (TNBC). However, chemoresistance frequently occurs, leading to enhanced failure rates of chemotherapy in TNBC; therefore, novel biological therapies are urgently needed. Gambogic acid (GA) has potent anticancer effects and inhibits tumor growth in several types of human cancer. However, the effects of GA on paclitaxel‑resistant TNBC remain unknown. In the present study, the Cell Counting Kit‑8 assay was used to examine the effect of GA and/or paclitaxel on the viability of TNBC cells; flow cytometry was used to examine the effects of GA on cell apoptosis; and western blotting and reverse transcription‑quantitative PCR were used to determine the effects of GA on the expression of sonic hedgehog (SHH) signaling pathway target genes. The present results indicated that GA significantly inhibited the viability and enhanced the rate of apoptosis in paclitaxel‑resistant MDA‑MB‑231 cells via activating the SHH signaling pathway. In vivo experiments confirmed that GA treatment enhanced the sensitivity of MDA‑MB‑231 cells to paclitaxel via the SHH signaling pathway. In conclusion, the combination of GA with paclitaxel may increase the antitumor effects on paclitaxel‑resistant TNBC via downregulating the SHH signaling pathway.

Background and purpose: Gambogic acid (GA) is a natural compound that exhibited a promising multi-target antitumor activity against several types of cancer. However, the clinical application of this drug is limited due to its poor solubility and low tumor cell-specific delivery. In this study, the monomeric and dimeric Cyclo (Arg-Gly-Asp) c(RGD) tumor targeting peptides (c(RGDfK) and E-[c(RGDfK)2]) were used to modify GA loaded nanostructured lipid carriers (NLC) to reduce the limitations associated with GA and improve its antitumor activity. Methods: GA-NLC was prepared by emulsification and solvent evaporation methods and the surface of the NLC was conjugated with the c(RGD) peptides via an amide bond. The formulations were characterized for particle size, morphology and zeta potential, encapsulation efficiency and drug loading. The in-vitro cytotoxicity and cell uptake studies were conducted using 4T1 cell. Furthermore, the in-vivo antitumor activity and bio-distribution study were performed on female BALB/c nude mice. Results: The c(RGD) peptides modified GA-NLC was successfully prepared with the particles size about 20 nm. The HPLC analysis, FT-IR and 1H-NMR spectra confirmed the successful conjugation of the peptides with the NLC. The in-vitro cytotoxicity study on 4T1 cells revealed that c(RGD) peptides modified GA-NLCs showed significantly higher cytotoxicity at 0.25 and 0.5 µg/mL as compared to unmodified GA-NLC. Furthermore, the cell uptake study demonstrated that better accumulation of E-[c(RGDfK)2] peptides modified NLC in 4T1 cell after 12 h incubation. Moreover, the in-vivo study showed that c(RGD)s functionalized GA-NLC exhibited better accumulation in tumor tissue and tumor growth inhibition. In contrast to the monomeric c(RGD) peptide, the dimeric c(RGD) peptide (E-[c(RGDfK)2]) conjugated GA-NLC showed the improved antitumor activity and tumor targeting ability of GA-NLC. Conclusion: These data provide further support for the potential clinical applications of E-[c(RGDfK)2]-GA-NLC in breast cancer therapy.

BACKGROUND/AIMS:
Although neuroblastoma is a heterogeneous cancer, a substantial portion overexpresses CD71 (transferrin receptor 1) and MYCN. This study provides a mechanistically driven rationale for a combination therapy targeting neuroblastomas that doubly overexpress or have amplified CD71 and MYCN. For this subset, CD71 was targeted by its natural ligand, gambogic acid (GA), and MYCN was targeted with an HDAC inhibitor, vorinostat. A combination of GA and vorinostat was then tested for efficacy in cancer and non-cancer cells.

METHODS:
Microarray analysis of cohorts of neuroblastoma patients indicated a subset of neuroblastomas overexpressing both CD71 and MYCN. The viability with proliferation changes were measured by MTT and colony formation assays in neuroblastoma cells. Transfection with CD71 or MYCN along with quantitative real-time polymerase chain reaction (qRT-PCR) and Western blotting were used to detect expression changes. For pathway analysis, gene ontology (GO) and Protein-protein interaction analyses were performed to evaluate the potential mechanisms of GA and vorinostat in treated cells.

RESULTS:
For both GA and vorinostat, their pathways were explored for specificity and dependence on their targets for efficacy. For GA-treated cells, the viability/proliferation loss due to GA was dependent on the expression of CD71 and involved activation of caspase-3 and degradation of EGFR. It relied on the JNK-IRE1-mTORC1 pathway. The drug vorinostat also reduced cell viability/proliferation in the treated cells and this was dependent on the presence of MYCN as MYCN siRNA transfection led to a blunting of vorinostat efficacy and conversely, MYCN overexpression improved the vorinostat potency in those cells. Vorinostat inhibition of MYCN led to an increase of the pro-apoptotic miR183 levels and this, in turn, reduced the viability/proliferation of these cells. The combination treatment with GA and vorinostat synergistically reduced cell survival in the MYCN and CD71 overexpressing tumor cells. The same treatment had no effect or minimal effect on HEK293 and HEF cells used as models of non-cancer cells.

CONCLUSION:
A combination therapy with GA and vorinostat may be suitable for MYCN and CD71 overexpressing neuroblastomas.

© Copyright by the Author(s). Published by Cell Physiol Biochem Press.

Targeting the Difficult-to-Drug CD71 and MYCN with Gambogic Acid and Vorinostat in a Class of Neuroblastomas. 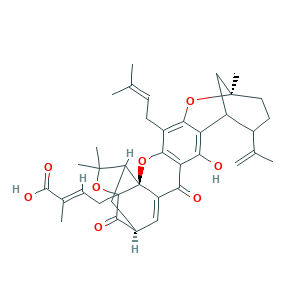 Gambogellic acid Item Number: BD-R0048 Specification : For Reference Standard and R&D, Not for Human Use Directly.CAS: 173867-04-4 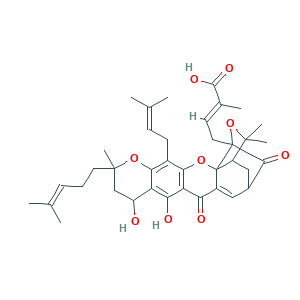 Neogambogic acid Item Number: BD-D1164 Specification : For Reference Standard and R&D, Not for Human Use Directly.CAS: 93772-31-7 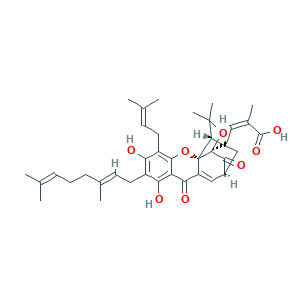 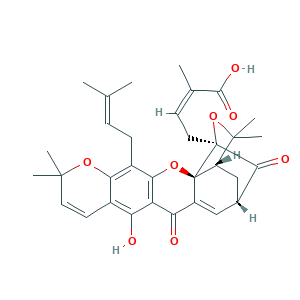 Morellic acid Item Number: BD-P0486 Specification : For Reference Standard and R&D, Not for Human Use Directly.CAS: 5304-71-2 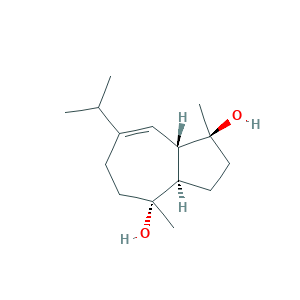