Isoorientin (or homoorientin) is a flavone, which is a chemical flavonoid-like compound, and a 6-C-glucoside of luteolin. Isoorientin has been demonstrated to have anti-cancer activities against various tumors, but its effects on pancreatic cancer (PC) have not been studied in detail. In this study, we aim to investigate whether isoorientin has potential anti-PC effects and its underlying mechanism. In PC, isoorientin strongly inhibited the survival of the cells, induced cell apoptosis, and decreased its malignancy by reversing the expression of epithelial-mesenchymal transition and matrix metalloproteinase and decreased vascular endothelial growth factor expression. Meanwhile, we investigated the activity of the AMP-activated protein kinase (AMPK) signaling pathway after isoorientin treatment, which was forcefully activated by isoorientin, as expected. In addition, in the PC cells that were transfected with lentivirus to interfere with the expression of the gene PRKAA1, there were no differences in the apoptosis rate and the expression of malignancy biomarkers in the tumors of the isoorientin-treated and untreated groups. Thus, we demonstrated that isoorientin has potential antitumor effects via the AMPK signaling pathway, and isoorientin merits further investigation.

Background: Gentiana is a genus of flowering plants in Gentianaceae family, which comprises of 1,600 species. The roots of few species of Gentiana, also known as Long Dan Cao in Chinese, are traditionally used in herbal remedies for a wide variety of liver-associated diseases. The medicinal part of Gentiana is root; however, the trumpet-shaped flowers are seldom being used.
Purpose: We investigated the anti-melanogenesis effect of water extract of Gentiana veitchiorum Hemsl. flowers, and isoorientin was identified to be the active compound.
Study design: We tested the anti-melanogenesis effects of extracts deriving from different parts of G. veitchiorum, followed by identification of active ingredients within the extracts. The mechanism of inhibitory effect on melanogenesis, triggered by isoorientin, was elucidated by in vitro analyses.
Methods: HPLC was applied to identify the components in water extracts from different parts of G. veitchiorum. The cytotoxicity of extracts and pure compounds in cultured B16F10 murine melanoma cells was determined by MTT and trypan blue assays. Melanin assay, tyrosinase assay, RT-PCR, luciferase assay and western blot were used to analyze the effect of isoorientin in melanin content, tyrosinase activity, as well as the expressions of those related genes and proteins.
Results: We identified an inhibitory effect on melanogenesis from water extract of G. veitchiorum flowers in B16F10 cells. Isoorientin, a major flavone in the extract, was identified to be an active ingredient causing reduction in melanin content in a dose-dependent manner. Such reduction was suggested to be a result of suppressed expression of tyrosinase (TYR), tyrosinase related protein-1 (TRP1) and DOPA-chrome tautomerase (DCT). Isoorientin also suppressed the expression of microphthalmia- associated transcription factor (MITF) through the phosphorylation of cAMP response element-binding protein (CREB).
Conclusion: These findings indicate that isoorientin derived from G. veitchiorum flowers may be a potential skin lightening agent for the treatment of skin pigmentary disorders.

Oxidative stress has been highlighted as therapeutic targets for acetaminophen (APAP)-induced hepatotoxicity. Isoorientin (Iso), a well-known flavonoid-like compound, has been shown to have antioxidant potential. However, the effect of Iso on APAP-induced liver injury has not yet been elucidated. The present study investigated the hepatoprotective effect of Iso and its underlying mechanism. C57BL/6J mice were used to evaluate the hepatoprotective effect of Iso in vivo and HepG2 cells were utilized to further decipher the mechanisms of Iso -induced Nrf2 activation. We found that Iso treatment significantly reduced APAP-induced hepatotoxicity by reducing the lethality, histopathological liver changes, and alanine transaminase (ALT) and aspartate aminotransferase (AST) levels in serum. These effects were accompanied by decreased malondialdehyde (MDA) formation and myeloperoxidase level (MPO), and by decreased superoxide dismutase (SOD) and glutathione (GSH) depletion. Moreover, Iso induced Nrf2 activation and translocation as well as upstream AMPK/Akt/GSK3β activation. Furthermore, Iso effectively alleviated mitochondrial dysfunction by reducing c-jun N-terminal kinase phosphorylation and translocation, Bax mitochondrial translocation, and apoptosis-inducing factor and cytochrome c release. Further mechanistic investigations revealed that the activation of Nrf2 by Iso via the AMPK/Akt/GSK3β pathway contributed to the hepatoprotective activity of Iso in vitro. In addition, the Iso-mediated inhibition of APAP-induced the lethality, histopathological changes and mitochondrial dysfunction observed in WT mice was nearly absent in Nrf2-/- mice. In summary, Iso ameliorated APAP-induced hepatotoxicity by activating Nrf2 via the AMPK/Akt/GSK3β pathway. 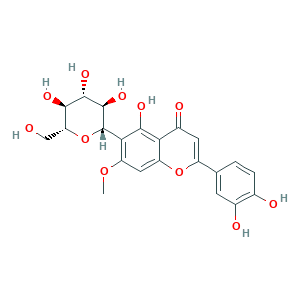 Swertiajaponin Item Number: BD-P0057 Specification : For Reference Standard and R&D, Not for Human Use Directly.CAS: 6980-25-2 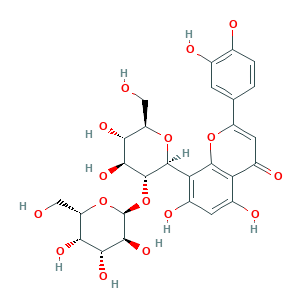 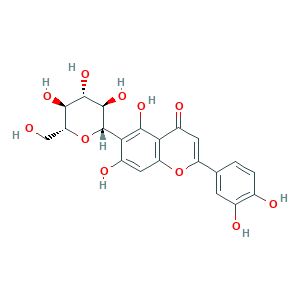 Homoorientin Item Number: BF-H3021 Specification : For Reference Standard and R&D, Not for Human Use Directly.CAS: 4261-42-1