Leonardite-based biostimulants are a large class of compounds, including humic acid substances. Foliar application of biostimulants at field level improves plant growth, yield and quality through metabolic changes and stimulation of plant proton pumps. The present study aimed at identifying optimum dosage of BLACKJAK, a humic acid-based substance, which is able to modify genes involved in sugar beet growth. Thirty-three genes belonging to various biochemical pathway categories were tested in leaves of treated sugar beet (Beta vulgaris L.) samples to assess gene expression profiling in response to BLACKJAK. Seedlings of a diploid and multigerm variety were grown in plastic pots and sprayed with two dilutions of BLACKJAK (dilution 1:500-1.0 mg C L−1 and dilution 1:1000-0.5 mg C L−1). Leaf samples were collected after 24, 48, and 72 h treatment with BLACKJAK for each dilution. RNA was extracted and the quantification of gene expression was performed while using an OpenArray platform. Results of analysis of variance demonstrated that, 15 genes out of a total of 33 genes tested with OpenArray qPCR were significantly affected by treatment and exposure time. Analysis for annotation of gene products and pathways revealed that genes belonging to the mitochondrial respiratory pathways, nitrogen and hormone metabolisms, and nutrient uptake were up-regulated in the BLACKJAK treated samples. Among the up-regulated genes, Bv_PHT2;1 and Bv_GLN1 expression exerted a 2-fold change in 1:1000 and 1:500 BLACKJAK concentrations. Overall, the gene expression data in the BLACKJAK treated leaves demonstrated the induction of plant growth-related genes that were contributed almost to amino acid and nitrogen metabolism, plant defense system, and plant growth.

Background
Saprobic fungi are the predominant industrial sources of Carbohydrate Active enZymes (CAZymes) used for the saccharification of lignocellulose during the production of second generation biofuels. The production of more effective enzyme cocktails is a key objective for efficient biofuel production. To achieve this objective, it is crucial to understand the response of fungi to lignocellulose substrates. Our previous study used RNA-seq to identify the genes induced in Aspergillus niger in response to wheat straw, a biofuel feedstock, and showed that the range of genes induced was greater than previously seen with simple inducers.

Results
In this work we used RNA-seq to identify the genes induced in A. niger in response to short rotation coppice willow and compared this with the response to wheat straw from our previous study, at the same time-point. The response to willow showed a large increase in expression of genes encoding CAZymes. Genes encoding the major activities required to saccharify lignocellulose were induced on willow such as endoglucanases, cellobiohydrolases and xylanases. The transcriptome response to willow had many similarities with the response to straw with some significant differences in the expression levels of individual genes which are discussed in relation to differences in substrate composition or other factors. Differences in transcript levels include higher levels on wheat straw from genes encoding enzymes classified as members of GH62 (an arabinofuranosidase) and CE1 (a feruloyl esterase) CAZy families whereas two genes encoding endoglucanases classified as members of the GH5 family had higher transcript levels when exposed to willow. There were changes in the cocktail of enzymes secreted by A. niger when cultured with willow or straw. Assays for particular enzymes as well as saccharification assays were used to compare the enzyme activities of the cocktails. Wheat straw induced an enzyme cocktail that saccharified wheat straw to a greater extent than willow. Genes not encoding CAZymes were also induced on willow such as hydrophobins as well as genes of unknown function. Several genes were identified as promising targets for future study.

Conclusions
By comparing this first study of the global transcriptional response of a fungus to willow with the response to straw, we have shown that the inducing lignocellulosic substrate has a marked effect upon the range of transcripts and enzymes expressed by A. niger. The use by industry of complex substrates such as wheat straw or willow could benefit efficient biofuel production.

The proper formation of synapses—specialized unitary structures formed between two neurons—is critical to mediating information flow in the brain. Synaptic cell adhesion molecules (CAMs) are thought to participate in the initiation of the synapse formation process. However, in vivo functional analysis demonstrates that most well known synaptic CAMs regulate synaptic maturation and plasticity rather than synapse formation, suggesting that either CAMs work synergistically in the process of forming synapses or more CAMs remain to be found. By screening for unknown CAMs using a co-culture system, we revealed that protein tyrosine phosphatase receptor type O (PTPRO) is a potent CAM that induces the formation of artificial synapse clusters in co-cultures of human embryonic kidney 293 cells and hippocampal neurons cultured from newborn mice regardless of gender. PTPRO was enriched in the mouse brain and localized to postsynaptic sites at excitatory synapses. The overexpression of PTPRO in cultured hippocampal neurons increased the number of synapses and the frequency of miniature EPSCs (mEPSCs). The knock-down (KD) of PTPRO expression in cultured neurons by short hairpin RNA (shRNA) reduced the number of synapses and the frequencies of the mEPSCs. The effects of shRNA KD were rescued by expressing either full-length PTPRO or a truncated PTPRO lacking the cytoplasmic domain. Consistent with these results, the N-terminal extracellular domain of PTPRO was required for its synaptogenic activity in the co-culture assay. Our data show that PTPRO is a synaptic CAM that serves as a potent initiator of the formation of excitatory synapses.

SIGNIFICANCE STATEMENT The formation of synapses is critical for the brain to execute its function and synaptic cell adhesion molecules (CAMs) play essential roles in initiating the formation of synapses. By screening for unknown CAMs using a co-culture system, we revealed that protein tyrosine phosphatase receptor type O (PTPRO) is a potent CAM that induces the formation of artificial synapse clusters. Using loss-of-function and gain-of-function approaches, we show that PTPRO promotes the formation of excitatory synapses. The N-terminal extracellular domain of PTPRO was required for its synaptogenic activity in cultured hippocampal neurons and the co-culture assay. Together, our data show that PTPRO is a synaptic CAM that serves as a potent initiator of synapse formation.

Effect of flavonoids on feeding preference and development of the crucifer pest Mamestra configurata Walker. PUMID/DOI：15074660 J Chem Ecol. 2004 Jan;30(1):109-24. Thirty-seven flavonoid compounds (9 flavones, 18 flavonols, 8 flavanones, and 2 flavanonols) were investigated for their effect on feeding choice with bertha armyworm (Mamestra configurata Walker; BAW). Feeding choice was dependent upon subtle differences in biochemical structure. Unsubstituted flavone and flavanone were the strongest feeding deterrents in the choice bioassay, while 7.4'-dihydroxyflavone and dihydroquercetin stimulated BAW to feed. The constitutive flavonoids of Brassica napus, isorhamnetin-3-sophoroside-7-glucoside and kaempferol-3,7-diglucoside, were effective deterrents when supplemented at concentrations higher than endogenous levels. In a no-choice bioassay, flavone reduced both larval weight as well as larval and pupal development time. 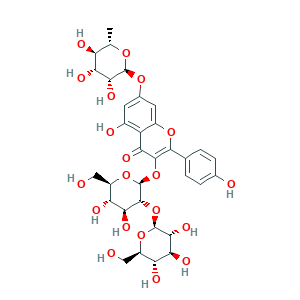 Kaempferol 3-sophoroside-7-rhamnoside Item Number: BD-P0757 Specification : For Reference Standard and R&D, Not for Human Use Directly.CAS: 93098-79-4 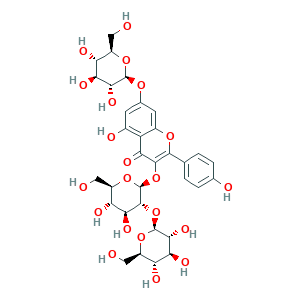 Kaempferol 3-sophoroside-7-glucoside Item Number: BD-P0220 Specification : For Reference Standard and R&D, Not for Human Use Directly.CAS: 55136-76-0 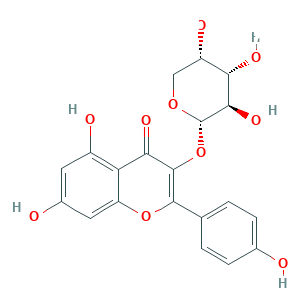 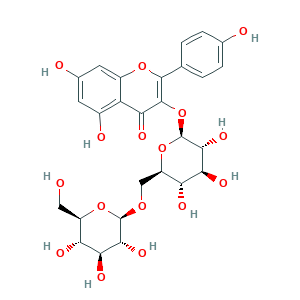 Kaempferol 3-O-gentiobioside Item Number: BF-K4004 Specification : For Reference Standard and R&D, Not for Human Use Directly.CAS: 22149-35-5