Ordered progression through the eukaryotic cell cycle is driven by cyclin-dependent protein kinase (CDK) complexes made up of a CDK catalytic subunit and an activating cyclin subunit. The dominant model for eukaryotic cell cycle control is that there is a succession of different CDK complexes with different substrate specificities that appear at different stages of the mitotic cell cycle. These qualitatively different kinase complexes drive cells through G1, S-phase, G2 and mitosis and additionally ensure there is a single S-phase each cell cycle1,2,3. This model has been challenged by work in fission yeast, where it has been shown that the four mitotic cell cycle CDK-cyclin complexes can be substituted by a single CDK-cyclin chimeric protein generated by the fusion of the Cdc13 cyclin with the CDK protein Cdc2 (ref. 4). These experiments have established that quantitative differences in the activity of a single CDK complex activity can bring about the different events of the cell cycle programme, and that qualitatively different CDK complexes are not absolutely required for ordered progression through the mitotic cell cycle5,6.

Meiosis is a specialized cell cycle programme in which a diploid parental cell generates haploid gametes by a single S-phase followed by two consecutive rounds of chromosome segregation. Meiotic cell cycle progression has specific features such as high levels of recombination and ploidy reduction, and involves different CDK-cyclin complexes, some of them common to the mitotic cell cycle and others that are meiosis specific. The roles of these complexes, including their functions, specificity and redundancies during the meiotic cell cycle, have not been systematically analysed.

The best-studied systems of meiotic cell cycle control are the two yeasts Saccharomyces cerevisiae and Schizosaccharomyces pombe. In the budding yeast S. cerevisiae, meiotic induction requires a temporally regulated gene expression cascade, which together with different post-translational regulatory mechanisms contributes to the control of cyclin protein dynamics during the meiotic cell cycle7,8. The G1 cyclins, Cln1, 2 and 3, which control the G1/S transition during the mitotic cell cycle, have no roles in the progression into premeiotic S-phase, which is instead coordinated by the meiosis-specific kinase Ime29. The B-type cyclins Clb5 and Clb6, which are dispensable for the mitotic cell cycle, become essential for premeiotic S-phase10,11. The major mitotic cyclin, Clb2, is not expressed in meiosis and has no roles in the regulation of meiotic nuclear divisions12. Instead, meiosis I is driven by Cdc28-Clb1, Clb4 and Clb5 complexes, and meiosis II relies on the regulation of Cdc28-Clb3 and Clb5 complexes13,14,15. These studies suggest that the differences between the meiotic and mitotic cell cycle programmes are achieved by qualitatively different properties of various CDK complexes brought about by the different specificities conferred by the cyclin subunits.

In the fission yeast S. pombe the meiotic cell cycle programme is activated by nutrient deprivation and it is regulated by the Pat1 kinase16. Premeiotic S-phase requires the presence of at least one of the two S-phase cyclins, Cig2 and Rem117,18, the latter being specifically expressed on meiotic induction18. A second meiotic-specific cyclin, Crs1, has been identified in S. pombe but its roles remain unclear. Crs1 was defined as a cyclin based on homology sequence analysis and no genetic or physical interaction with CDKs or other cyclins has been reported19,20. The regulation of the anaphase-promoting complex/cyclosome (APC/C), which controls Cdc13 stability, explains how CDK activity can be differentially modulated during meiotic nuclear divisions. At the end of anaphase I, the Mes1 protein antagonizes APC/C activity and prevents the degradation of a fraction of Cdc13 cyclin, which ensures there is sufficient CDK activity to progress into meiosis II21,22,23.

Here, we have systematically analysed the functions of the different mitotic and meiotic cyclins during the fission yeast meiotic cell cycle, identifying unreported roles for Rem1 and Crs1. In addition, using a chimeric protein approach, we demonstrate that, in the absence of other cyclins, a single CDK complex can drive ordered progression through the mitotic4 and meiotic cell cycle programmes.

Infected cell protein 0 (ICP0), a major immediate-early regulatory protein of herpes simplex virus type 1 (HSV-1), activates expression of all classes of HSV genes as well as a variety of heterologous viral and cellular genes. Previous studies have shown that a cellular activity expressed maximally in Vero cells 8 h after release from growth arrest in the G0/G1 phase of the cell cycle can enhance plaque formation and gene expression of a mutant virus (7134) lacking both copies of the gene encoding ICP0 (W. Cai and P. Schaffer, J. Virol. 65:4078-4090, 1991). This observation suggests that the cellular activity can substitute for ICP0 to activate viral gene expression. To further characterize this cellular activity, Vero and NB41A3 (mouse neuroblastoma) cells were transfected at various times after release from growth arrest with promoter-chloramphenicol acetyltransferase (CAT) constructs containing promoters representing the major kinetic classes of HSV genes, and CAT activity was measured from 2 to 24 h postrelease. The results of these tests demonstrate that CAT expression from immediate-early promoter-CAT plasmids was enhanced 10- and 3-fold when Vero and NB41A3 cells were transfected at 6 and 2 h postrelease, respectively. In contrast, only low levels of immediate-early promoter-driven CAT activity were apparent when cells were transfected at later times postrelease. No significant stimulation of CAT activity was observed from promoter-CAT plasmids containing representative early or late HSV promoters or a heterologous viral (simian virus 40 early) promoter. Differences in the efficiency of uptake of plasmid DNA by cells at various times postrelease did not account for the observed differences in CAT expression. Unlike Vero cells, in which cell division resumed after release from growth arrest, division of NB41A3 cells did not resume. Rather, these cells displayed morphological features suggestive of a differentiated phenotype. Collectively, these findings demonstrate that a cellular activity expressed in Vero and NB41A3 cells after release from growth arrest can activate HSV gene expression by enhancing immediate-early gene expression.

Soluble derivatives of T-cell antigen receptors (TCRs) should prove invaluable for studying the interaction of these receptors with antigens and major histocompatibility complex molecules, for structural studies, and for the identification of unknown ligands. We have engineered chimeric proteins, containing the extracellular domains of the mouse V gamma 1.1-C gamma 4 and V delta 6.2-C delta (V, variable; C, constant) TCR chains fused to the hinge region, CH2 (H, heavy), and CH3 domains of human IgG1 heavy chain, and expressed them by transient transfection in COS cells. We show here that TCR gamma-IgH and TCR delta-IgH chimeric chains are produced intracellularly in significant amounts, that the two chains can assemble correctly to form disulfide-linked, glycosylated heterodimers, and that a selective mechanism allows secretion of correctly paired receptor chains into the medium. Identity of the chimeric secreted TCR gamma delta-IgH heterodimer was confirmed by immunoblot analysis using V gamma 1-specific anti-peptide antiserum and immunoprecipitation analysis using the monoclonal antibody UC7, which is shown to be specific for the TCR delta chain. In addition, the soluble TCR gamma delta-IgH heterodimer can be immunoprecipitated with the anti-clonotypic monoclonal antibody F10/56, which suggests that the fusion protein likely has a structural conformation similar to that of the native TCR. The COS cell expression system may prove useful for the production of additional TCR-IgH fusion proteins. 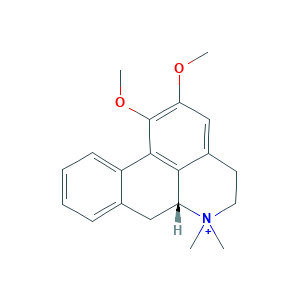 N-Methylnuciferine Item Number: BD-D1009 Specification : For Reference Standard and R&D, Not for Human Use Directly.CAS: 754919-24-9 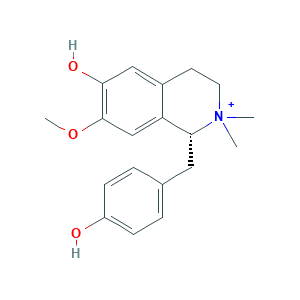 Lotusine Item Number: BD-D0954 Specification : For Reference Standard and R&D, Not for Human Use Directly.CAS: 6871-67-6 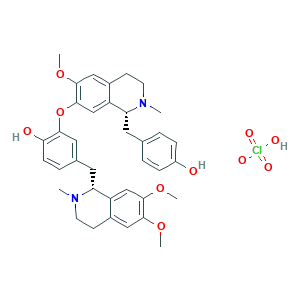 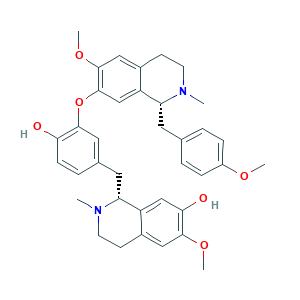 Isoliensinine Item Number: BF-I1005 Specification : For Reference Standard and R&D, Not for Human Use Directly.CAS: 6817-41-0