γ-Mangostin is a xanthone with hydroxyl groups that confer the substance-free radical scavenging effects. As opposed to the other more extensively studied mangostins, scarce research has been conducted on neuroprotective effects of γ-mangostin on models of Parkinson’s disease (PD). Therefore, this investigation aimed to elucidate its antioxidant and neuroprotective effects on 6-OHDA-induced toxicity in SH-SY5Y cells. 6-OHDA treatment, an inducer of PD pathology in vitro studies, decreased cell viability and increased the level of intracellular ROS production. Furthermore, the substance-induced the expression of phosphorylated p38 MAPK, negatively affected the Bax/Bcl-2 ratio and increased caspase-3 activity; all of which were factors that are associated with apoptosis. Pretreatment of cells with γ-mangostin at concentrations of 0.5, 1, and 2.5μM markedly increased cell survival and reduced the level of intracellular ROS formation as shown by DPPH radical scavenging activity of the compound. Furthermore, a significant suppression of p-p38, improved Bax/Bcl-2 ratio expression, and reduced caspase-3 activity was exhibited in the cells after γ-mangostin pretreatment. The reduction of apoptosis was further supported by the reduction of pyknotic nuclei indicated by Hoescht 33342 staining. These findings indicate that γ-mangostin could attenuate 6-OHDA-induced neuronal cell death and that the protective effect of γ-mangostin is associated with its antioxidative potential and through the modulation of the apoptotic signalling pathway. Therefore, γ-mangostin may be an effective xanthone among other mangostins for preventing neurodegeneration in PD caused by oxidative stress.

Given that colon cancer is the third most common cancer in incidence and cause of death in the United States, and current treatment modalities are insufficient, there is a need to develop novel agents. Towards this, here we focus on γ-Mangostin, a bioactive compound present in the Mangosteen (Garcinia mangostana) fruit. γ-Mangostin suppressed proliferation and colony formation, and induced cell cycle arrest and apoptosis of colon cancer cell lines. Further, γ-Mangostin inhibited colonosphere formation. Molecular docking and CETSA (Cellular thermal shift assay) binding assays demonstrated that γ-Mangostin interacts with transcription factor TCF4 (T-Cell Factor 4) at the β-catenin binding domain with the binding energy of -5.5 Kcal/mol. Moreover, γ-Mangostin treatment decreased TCF4 expression and reduced TCF reporter activity. The compound also suppressed the expression of Wnt signaling target proteins cyclin D1 and c-Myc, and stem cell markers such as LGR5, DCLK1 and CD44. To determine the effect of γ-Mangostin on tumor growth in vivo, we administered nude mice harboring HCT116 tumor xenografts with 5 mg/Kg of γ-Mangostin intraperitoneally for 21 days. γ-Mangostin treatment significantly suppressed tumor growth, with notably lowered tumor volume and weight. In addition, western blot analysis revealed a significant decrease in the expression of TCF4 and its downstream targets such as cyclin D1 and c-Myc. Together, these data suggest that γ-Mangostin inhibits colon cancer growth through targeting TCF4. γ-Mangostin may be a potential therapeutic agent for colon cancer.

Among a series of xanthones identified from mangosteen, the fruit of Garcinia mangostana L. (Guttifereae), α- and γ-mangostins are known to be major constituents exhibiting diverse biological activities. However, the effects of γ-mangostin on oxidative neurotoxicity and impaired memory are yet to be elucidated. In the present study, the protective effect of γ-mangostin on oxidative stress-induced neuronal cell death and its underlying action mechanism(s) were investigated and compared to that of α-mangostin using primary cultured rat cortical cells. In addition, the effect of orally administered γ-mangostin on scopolamine-induced memory impairment was evaluated in mice. We found that γ-mangostin exhibited prominent protection against H2O2- or xanthine/xanthine oxidase-induced oxidative neuronal death and inhibited reactive oxygen species (ROS) generation triggered by these oxidative insults. In contrast, α-mangostin had no effects on the oxidative neuronal damage or associated ROS production. We also found that γ-mangostin, not α-mangostin, significantly inhibited H2O2-induced DNA fragmentation and activation of caspases 3 and 9, demonstrating its antiapoptotic action. In addition, only γ-mangostin was found to effectively inhibit lipid peroxidation and DPPH radical formation, while both mangostins inhibited β-secretase activity. Furthermore, we observed that the oral administration of γ-mangostin at dosages of 10 and 30 mg/kg markedly improved scopolamine-induced memory impairment in mice. Collectively, these results provide both in vitro and in vivo evidences for the neuroprotective and memory enhancing effects of γ-mangostin. Multiple mechanisms underlying this neuroprotective action were suggested in this study. Based on our findings, γ-mangostin could serve as a potentially preferable candidate over α-mangostin in combatting oxidative stress-associated neurodegenerative diseases including Alzheimer’s disease.

Inhibition of Oxidative Neurotoxicity and Scopolamine-Induced Memory Impairment by γ-Mangostin: In Vitro and In Vivo Evidence 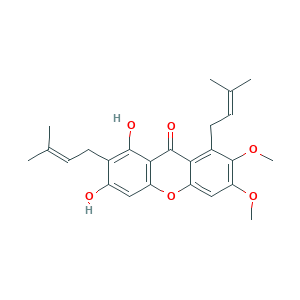 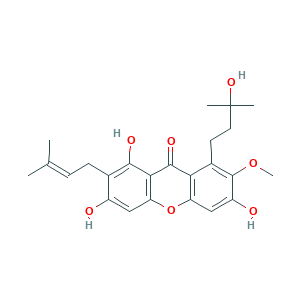 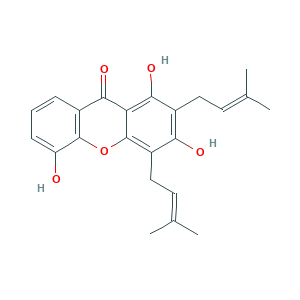 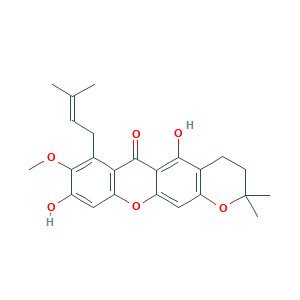 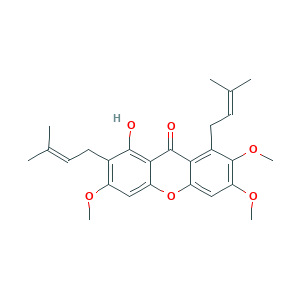 Fuscaxanthone C Item Number: BD-D0283 Specification : For Reference Standard and R&D, Not for Human Use Directly.CAS: 15404-76-9 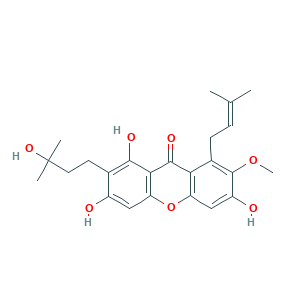 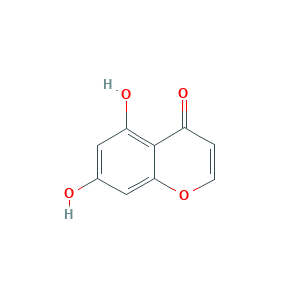 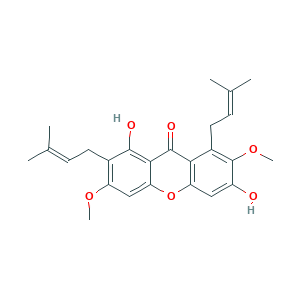 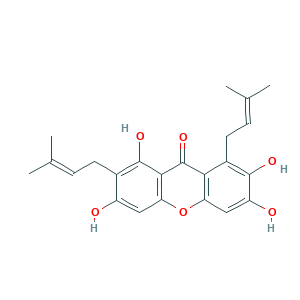