Methods: The proliferation rate of the leukemia cells was checked by CCK-8 assay. Apoptotic cell death was studied by acridine orange (AO)/ethidium bromide (EB) staining. Cell cycle analysis was performed by flow cytometery. Cell migration and invasion were checked by transwell assay. Protein expression were determined by immuno blotting. Xenografted mice models were used for in vivo evaluation of Nodakenetin.

Results: Nodakenetin could significantly inhibit the proliferation of the all the leukemia cells. The anticancer activity of Nodakenetin against the HL-60 cells was found to be due to G2/M cell cycle arrest and induction of apoptosis. Nodakenetin prompted mitochondrial apoptosis which was also associated with alteration in the apoptosis-related protein expression (Bax and Bcl-2). It was also observed that Nodakenetin could inhibit the migration and invasion of the leukemia cells in a concentration-dependent manner. The effects of the Nodakenetin were also investigated in vivo in xenografted mice models and it was found that this molecule could inhibit the growth of xenografted tumors.

Conclusions: These results indicate Nodakenetin significantly inhibits the growth of leukemia cells in vitro and in vivo and may be a valuable molecule in the management of leukemia, and as such needs further in depth investigations.

In vitro and in vivo growth inhibition of human leukemia cells by Nodakenetin are mediated via mitochondrial apoptosis, cell cycle arrest and inhibition of cell migration and invasion

Leukemia is one of the highly lethal cancers among all pediatric cancers. With limited drug options and the severe side effects associated with the current chemotherapy, there is pressing need to look for new and novel anticancer agents. Against this backdrop, in the present study we evaluated the anticancer activity of a natural coumarin, marmesin against human leukemia cell line U937 and normal human monocytes It was observed that marmesin exhibited an IC50 value of 40 µM and exerted its cytotoxic effects in a dose-dependent manner. However, the cytotoxic effects of marmesin were comparatively lower for the normal human monocytes as evident from the IC50 of 125 µM. Our results indicated that marmesin inhibits colony formation and induces apoptosis dose-dependently. We also investigated the effect of marmesin on the expression of Bax and Bcl-2 proteins. It was observed that marmesin treatment triggered upregulation of Bax and downregulation of Bcl-2 causing significant increase in the Bax/Bcl-2 ratio, marmesin could also induce ROS mediated alterations in mitochondrial membrane potential. Additionally, marmesin induced G2/M cell cycle arrest and significantly inhibited cell migration potential of leukemia cells at the IC50. Remarkably, marmesin prevent tumor growth significantly in vivo at the dosage of 30 mg/kg in vivo. These results strongly indicate that marmesin may prove to be a novel anticancer lead for the management of leukemia.

In vitro and in vivo anticancer effects of marmesin in U937 human leukemia cells are mediated via mitochondrial-mediated apoptosis, cell cycle arrest, and inhibition of cancer cell migration

In the present study, we investigated the effects and molecular mechanism of marmesin, a natural coumarin compound isolated from Broussonetia kazinoki, on non-small cell lung cancer (NSCLC) cell responses and tumor angiogenesis. Marmesin abrogated mitogen-stimulated proliferation and invasion in both p53 wild-type A549 and p53-deficient H1299 NSCLC cells. These antitumor activities of marmesin were mediated by the inactivation of mitogenic signaling pathways and downregulation of cell signaling-related proteins including vascular endothelial growth factor receptor-2 (VEGFR-2), integrin β1, integrin-linked kinase and matrix metalloproteinases-2. Furthermore, marmesin suppressed the expression and secretion of VEGF in both NSCLC cells, leading to inhibition of capillary-like structure formation in human umbilical vein endothelial cells. Collectively, these findings demonstrate the pharmacological roles and molecular targets of marmesin in regulating NSCLC cell responses and tumor angiogenesis.

Irritant and cytotoxic coumarins from Angelica glauca Edgew roots. PUMID/DOI：18058380 J Asian Nat Prod Res. 2008 Jan-Feb;10(1-2):49-58. Irritant and cytotoxic potentiality of six coumarins, isolated for the first time from the roots of Angelica glauca identified as 5,6,7-trimethoxycoumarin, 6-methoxy-7,8-methylenedioxycoumarin, bergapten, decursinol angelate, decursin, and Nodakenetin, were investigated. The irritant potential was explored by open mouse ear assay, evaluating their ID(50) after acute and by IU (Irritant units) after chronic effects, while the cytotoxic capability was explored by their LC(50), using brine shrimp (Artemia salina) larvae (nauplii). All the coumarins exhibited well-defined irritancy on mouse's ears, compared with the positive controlled euphorbium reaction and cytotoxic response against brine shrimp larvae, compared with the positive control colchicine. Decursinol angelate and decursin were the most potent and persistent irritant compounds with least ID(50), whose reactions lasted for 48 h. 6-Methoxy-7,8-methylenedioxycoumarin and bergaten revealed an intermediate irritant reactions, while 5,6,7-trimethoxycoumarin and Nodakenetin displayed the least irritant and least persistent reactions on mouse ears. Both decursin and decursinol angelate also appeared to be the stronger cytotoxic agents than other coumarins. 5,6,7-trimethoxycoumarin displayed an intermediate cytotoxic behaviour, while other three coumarins, i.e., 6-methoxy-7,8-methylenedioxycoumarin, bergapten, and Nodakenetin, exhibited the least cytotoxic capacity against brine shrimp larvae. 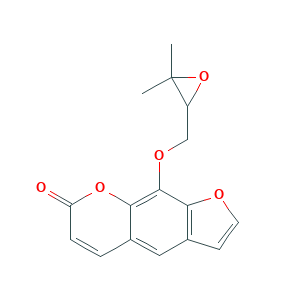 oxyimperatorin Item Number: BD-R0067 Specification : For Reference Standard and R&D, Not for Human Use Directly.CAS: 35740-18-2 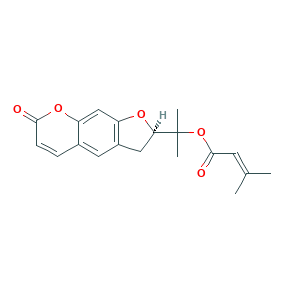 Isopropylidenylacetyl-marmesin Item Number: BD-D0562 Specification : For Reference Standard and R&D, Not for Human Use Directly.CAS: 35178-20-2 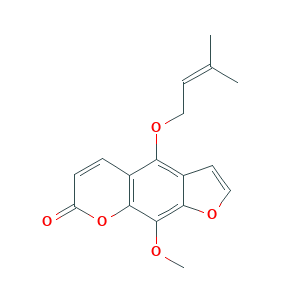