BACKGROUND:
Oroxylum indicum (L.) Kurz (Bignoniaceae) has been widely used for the treatment of respiratory infections and gastrointestinal disorders. Our previous study showed that an ethanol-water O. indicum seed extract (OISE), when combined with acarbose, reduced the risk of diabetes by 75% and effectively prevented the associated complications. Oroxin A, a major component of OISE, can activate PPARγ and inhibit α-glucosidase and it represents a promising candidate for diabetes intervention.

PURPOSE:
The aim of this study is to investigate the effect of oroxin A from O. indicum on the progression of prediabetes to diabetes and the underlying mechanisms in streptozotocin and high-fat-diet induced prediabetic mice.

METHODS:
Oroxin A was purified from OISE and its PPARγ transcriptional activation was determined in vitro and in vivo. The prediabetic mice were established by high-fat diet and streptozotocin, which was followed by treatment with oroxin A. The effect of oroxin A was determined by analysis of the lipid profiles, oxidative stress, hepatic function and histology. The mechanism of oroxin A was also investigated.

RESULTS:
Oroxin A is a compound with low toxicity that has reduced the relative risk of progression from prediabetes to diabetes by 66.7% without inducing weight gain or hepatotoxicity. Oroxin A also improved the complications of prediabetes, such as lipid metabolism dysfunction and liver injury. Results of mechanism studies suggested that oroxin A is a partial PPARγ agonist that can activate PPARγ transcriptional activation in vitro and in vivo. Oroxin A also exhibited an inhibitory activity against α-glucosidase and an antioxidant capacity.

CONCLUSION:
Oroxin A prevents the progression from prediabetes to diabetes through a multi-pathway intervention mechanism.

Oroxin A from Oroxylum indicum prevents the progression from prediabetes to diabetes in streptozotocin and high-fat diet induced mice.

Breast cancer is a major cause of cancer death among women. Although various anticancer drugs have been used in clinics, drugs that are effective against advanced and metastatic breast cancer are still lacking and in great demand. In this study, we found that oroxin A, an active component isolated from the herb Oroxylum indicum (L.) Kurz, effectively inhibited the growth of human breast cancer cells MDA-MB-231 and MCF7 by inducing endoplasmic reticulum (ER) stress-mediated senescence. Oroxin A caused breast cancer cell cycle arrest at the G2/M stage, and reorganization of microtubules and actin cytoskeleton accompanied by a decrease in cellular mitosis. ER-specific probe ER-Tracker Red and confocal microscope imaging showed that ER-Tracker Red-positive cells increased in an oroxin A dosage-dependent manner. In addition, oroxin A increased cell population with high β-Gal activity and SAHF-positive staining; these data suggest that oroxin A induces breast cancer cell ER stress and senescence. Mechanistic studies showed that oroxin A led to a significant increase in intracellular reactive oxygen species levels, promoted expression of ER stress markers ATF4 and GRP78, and increased the phosphorylation of a key stress-response signaling protein p38, resulting in an ER stress-mediated senescence. Taken together, our data indicate that oroxin A exerts its antibreast cancer effects by inducing ER stress-mediated senescence, activating the key stress p38 signaling pathway, and increasing key ER stress genes ATF4 and GRP78 expression levels.

A novel environment-friendly method to access bioactive oroxin A through a one-pot/two-step process from naturally abundant and inexpensive baicalin is described. The procedure presented here has several advantages including clean, one-pot, synthetic ease, and large-scale feasibility. This work also provides a model strategy for rapid and diverse access to natural molecules sharing the common skeleton of this family.

Development of a Concise Synthetic Approach to Access Oroxin A. 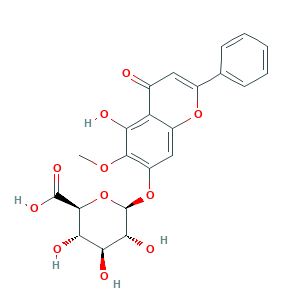 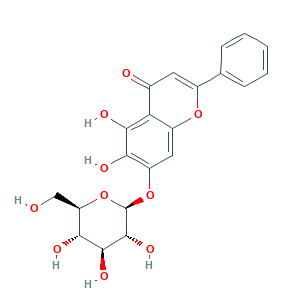 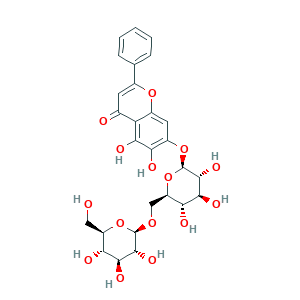 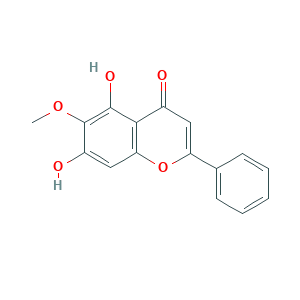 Oroxylin A Item Number: BF-O2004 Specification : For Reference Standard and R&D, Not for Human Use Directly.CAS: 480-11-5