To prepare Helix aspersa muller-paeonol nanogel( PAE-HAM-Gels) with anti-proliferative scar effect,evaluate its skin penetration,retention and irritation,and to investigate its prevention and treatment effect for hypertrophic scar in rabbit ears. The dermal retention,transdermal rate and cumulative permeability of paeonol were investigated in vitro by using the modified Franz diffusion cell and the abdominal skin of suckling pigs,SD rats and KM mice,respectively,and the in vitro permeation curves were drawn. The normal skin of the back of New Zealand rabbits was continuously treated with PAE-HAM-Gels for 7 days,and the physiological state of the skin was observed under light microscope after HE staining by using homologous left and right contrast method. The hypertrophic scar model in rabbit ears was established,and the New Zealand rabbits were randomly divided into blank group,model group,positive drug group,PAE-Gels group and PAE-HAM-Gels group. After 28 days of administration,the scar hyperplasia rate and scar elevation index( SEI) of each group were calculated; the scar tissues were taken and stained with Masson for observation of collagen fibers and muscle fibers hyperplasia under light microscope,and the expression level of TGF-β1 in each group was detected. The Qnof PAE-HAM-Gels in aqueous solution was in line with the Higuchi equation,and its transdermal rate,cumulative permeation and dermal retention in different animal skins were all higher than those of PAE-Gels. The skin of the drug-administered group was intact,without erythema,edema or other phenomena; under light microscope,the subcutaneous tissue and the epidermal cells were neatly arranged with uniform thickness,which showed no difference from the blank group. The scar hyperplasia rate of the PAE-HAM-Gels group was 62. 50%; SEI was 2. 17±0. 33 and TGF-β1 was( 815. 4±34. 69) ng·L~(-1),significantly different from those in model group( P<0. 01). Masson staining showed that as compared with the model group,the number of collagen fibers and muscle fibers was small and the arrangement was loose and tidy in the PAE-HAM-Gels group,with regular arrangement of chondrocytes and a small number of inflammatory cells and microvessels.PAE-HAM-Gels have good transdermal properties and dermal retention without skin irritation,offering a promising therapeutic strategy for transdermal delivery during the prevention and treatment of hypertrophic scar in rabbit ears.

[Study on physicochemical properties of paeonol-Helix aspersa muller nanogel and its inhibitory effects on hypertrophic scar tissue in rabbit ear].

Moutan Cortex has been widely used to treat various types of arthritis in traditional Chinese medicine. Paeonol is isolated as an active ingredient from Moutan Cortex. However, the effect and potential mechanism of paeonol on gouty arthritis have not been evaluated. In this study, rats were treated intragastrically with paeonol for consecutive 7 days. On Day 5, rats were intra-articularly injected with monosodium urate (MSU) crystals in the ankle joints to induce MSU-induced arthritis (MIA). Paw volume was detected at various time points. Gait score was measured at 24 hr after MSU crystal injection. Ankle joints were collected for evaluation of histological score and expression of proinflammatory cytokines using hematoxylin and eosin staining and immunohistochemistry staining, respectively. Nuclear level of nuclear factor (NF)-κBp65 in synovial tissues was analyzed by western blot assay. NF-κB DNA-binding activity was measured by enzyme linked immunosorbent assay. Paeonol markedly lowered the paw volume, gait score, and histological score in MIA rats. Mechanistically, paeonol markedly reduced the expression of TNF-α, IL-1β, and IL-6 in synovial tissues of MIA rats. In addition, the elevated level of p65 in nucleus and NF-κB DNA-binding activity in synovial tissues of MIA rats were reduced significantly by paeonol treatment. These findings suggest that paeonol exerts anti-inflammatory effect in MIA rats through inhibiting expression of proinflammatory cytokines and NF-κB activation.

Paeonol is an active extraction from the root of Paeonia suffruticosa, Paeonol inhibits MAO-A and MAO-B with IC50 of 54.6 μM and 42.5 μM, respectively. 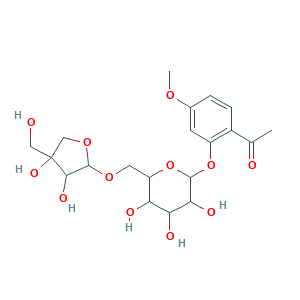 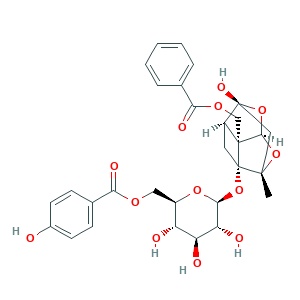 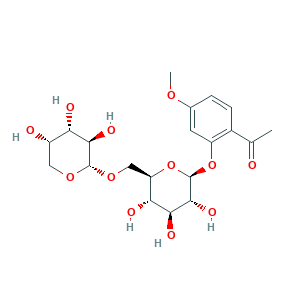