METHODS:
Five glioma cell lines (U251, U343, LN229, U87 and HEB) and an animal model were employed in the study. Anti-proliferation effects of PPVI were first determined using CCK-8 cell proliferation and clone formation assays, then reactive oxygen species (ROS), cell cycle progression and apoptosis effects measured by flow cytometry. The effect of PPVI on protein expression was quantified by Western blot analysis.

CONCLUSION:
Overall, these data suggested that PPVI might be an effective therapeutic agent for glioma.

Trillium tschonoskii Maxim (TTM), a traditional Chinese medicine, has been demonstrated to have a potent anti-tumor effect. Recently, polyphyllin VI (PPVI), a main saponin isolated from TTM, was reported by us to significantly suppress the proliferation of non-small cell lung cancer (NSCLC) via the induction of apoptosis and autophagy in vitro and in vivo. In this study, we further found that the NLRP3 inflammasome was activated in PPVI administrated A549-bearing athymic nude mice. As is known to us, pyroptosis is an inflammatory form of caspase-1-dependent programmed cell death that plays an important role in cancer. By using A549 and H1299 cells, the in vitro effect and action mechanism by which PPVI induces activation of the NLRP3 inflammasome in NSCLC were investigated. The anti-proliferative effect of PPVI in A549 and H1299 cells was firstly measured and validated by MTT assay. The activation of the NLRP3 inflammasome was detected by using Hoechst33324/PI staining, flow cytometry analysis and real-time live cell imaging methods. We found that PPVI significantly increased the percentage of cells with PI signal in A549 and H1299, and the dynamic change in cell morphology and the process of cell death of A549 cells indicated that PPVI induced an apoptosis-to-pyroptosis switch, and, ultimately, lytic cell death. In addition, belnacasan (VX-765), an inhibitor of caspase-1, could remarkably decrease the pyroptotic cell death of PPVI-treated A549 and H1299 cells. Moreover, by detecting the expression of NLRP3, ASC, caspase-1, IL-1β, IL-18 and GSDMD in A549 and h1299 cells using Western blotting, immunofluorescence imaging and flow cytometric analysis, measuring the caspase-1 activity using colorimetric assay, and quantifying the cytokines level of IL-1β and IL-18 using ELISA, the NLRP3 inflammasome was found to be activated in a dose manner, while VX-765 and necrosulfonamide (NSA), an inhibitor of GSDMD, could inhibit PPVI-induced activation of the NLRP3 inflammasome. Furthermore, the mechanism study found that PPVI could activate the NF-κB signaling pathway via increasing reactive oxygen species (ROS) levels in A549 and H1299 cells, and N-acetyl-L-cysteine (NAC), a scavenger of ROS, remarkably inhibited the cell death, and the activation of NF-κB and the NLRP3 inflammasome in PPVI-treated A549 and H1299 cells. Taken together, these data suggested that PPVI-induced, caspase-1-mediated pyroptosis via the induction of the ROS/NF-κB/NLRP3/GSDMD signal axis in NSCLC, which further clarified the mechanism of PPVI in the inhibition of NSCLC, and thereby provided a possibility for PPVI to serve as a novel therapeutic agent for NSCLC in the future.

Non-small cell lung cancer (NSCLC) accounts for approximately 85% of all lung cancers. Our previous studies have proven that Trillium tschonoskii Maxim. (TTM), a traditional Chinese medicine, possesses potent anti-tumor effect. However, the detailed components and molecular mechanism of TTM in anti-NSCLC are still unknown. In the present experiment, polyphyllin VI (PPVI) was successfully isolated from TTM with guidance of the anti-proliferative effect in A549 cells, and the cell death of PPVI treated A549 and H1299 cells was closely linked with the increased intracellular ROS levels. In addition, PPVI induced apoptosis by promoting the protein expression of Bax/Bcl2, caspase-3 and caspase-9, and activated autophagy by improving LC3 II conversion and GFP-LC3 puncta formation in A549 and H1299 cells. The mechanism study found that the activity of mTOR which regulates cell growth, proliferation and autophagy was significantly suppressed by PPVI. Accordingly, the PI3K/AKT and MEK/ERK pathways positively regulating mTOR were inhibited, and AMPK negatively regulating mTOR was activated. In addition, the downstream of mTOR, ULK1 at Ser 757 which downregulates autophagy was inhibited by PPVI. The apoptotic cell death induced by PPVI was confirmed, and it was significantly suppressed by the overexpression of AKT, ERK and mTOR, and the induced autophagic cell death which was depended on the Atg7 was decreased by the inhibitors, such as LY294002 (LY), Bafilomycin A1 (Baf), Compound C (CC) and SBI-0206965 (SBI). Furthermore, the mTOR signaling pathway was regulated by the increased ROS as the initial signal in A549 and H1299 cells. Finally, the anti-tumor growth activity of PPVI in vivo was validated in A549 bearing athymic nude mice. Taken together, our data have firstly demonstrated that PPVI is the main component in TTM that exerts the anti-proliferative effect by inducing apoptotic and autophagic cell death in NSCLC via the ROS-triggered mTOR signaling pathway, and PPVI may be a promising candidate for the treatment of NSCLC in future. 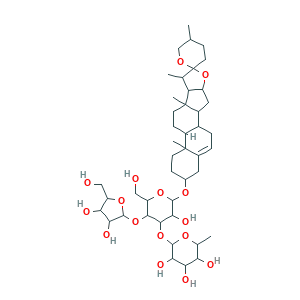 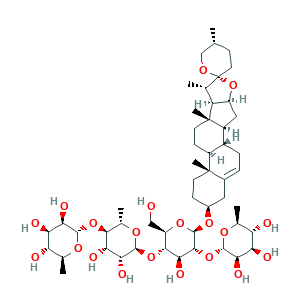 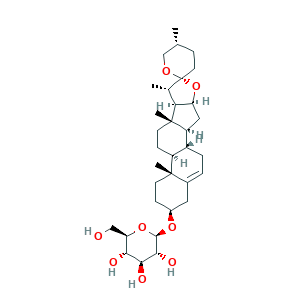 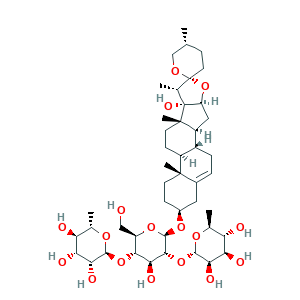 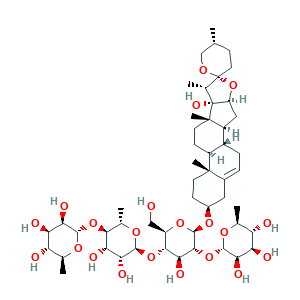 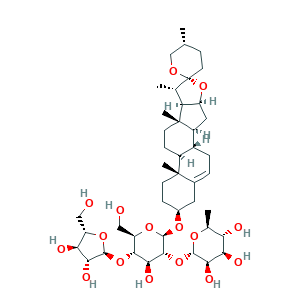 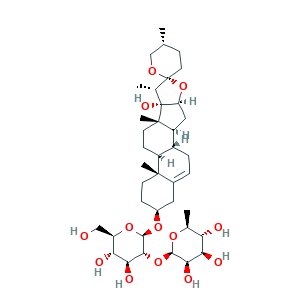 Polyphyllin VI Item Number: BF-P2011 Specification : For Reference Standard and R&D, Not for Human Use Directly.CAS: 55916-51-3

Diosgenin glucoside Item Number: AV-H25047 Specification : For Reference Standard and R&D, Not for Human Use Directly.CAS: 14144-06-0