Allergic asthma is an inflammatory lung disease that is partly sustained by the chemokine eotaxin-3 (CCL26), which extends eosinophil migration into tissues long after allergen exposure. Modulation of CCL26 could represent a means to mitigate airway inflammation. Here we evaluated procyanidin A2 as a means of modulating CCL26 production and investigated interactions with the known inflammation modulator, Interferon γ (IFNγ). We used the human lung epithelial cell line A549 and optimized the conditions for inducing CCL26. Cells were exposed to a range of procyanidin A2 or IFNγ concentrations for varied lengths of time prior to an inflammatory insult of interleukin-4 (IL-4) for 24 h. An enzyme-linked immunosorbent assay was used to measure CCL26 production. Exposing cells to 5 μM procyanidin A2 (prior to IL-4) reduced CCL26 production by 35% compared with control. Greatest inhibition by procyanidin A2 was seen with a 2 h exposure prior to IL-4, whereas IFNγ inhibition was greatest at 24 h. Concomitant incubation of procyanidin A2 and IFNγ did not extend the inhibitory efficacy of procyanidin A2. These data provide evidence that procyanidin A2 can modulate IL-4-induced CCL26 production by A549 lung epithelial cells and that it does so in a manner that is different from IFNγ.

There is a need to investigate new methods of controlling cyathostomins in horses due to increasing anthelmintic resistance amongst these parasites. In a previous study we identified the Australian plant Alectryon oleifolius as having anthelmintic activity towards cyathostomins. This study aimed to isolate and identify the bioactive compound(s) responsible for all or part of this anthelmintic activity and quantify its activity in vitro. The condensed tannin procyanidin A2 was isolated from the plant through a process of bioassay guided fractionation and identified using 1D and 2D nuclear magnetic resonance spectroscopy and high performance liquid chromatography with mass spectrometry. Procyanidin A2 demonstrated significant anthelmintic activity in larval development assays, completely inhibiting development from egg to third larval stage at concentrations as low as 50μg/mL and having an IC50 value of 12.6μg/mL. Procyanidin A2 also significantly inhibited larval migration at concentrations of 25μg/mL. This study indicates that procyanidin A2 is the principal anthelmintic compound in extracts from A. oleifolius, and further highlights the potential for the use of this plant as a component of cyathostomin control programs in the future.

Cocoa is known as an important source of flavan-3-ols, but their fate “from the bean to the bar” is not yet clear. Here, procyanidin A2 found in native cocoa beans (9-13 mg/kg) appeared partially epimerized into A2E1 through fermentation, whereas a second epimer (A2E2) emerged after roasting. At m/z 575, dehydrodiepicatechin A was revealed to be the major HPLC peak before fermentation, whereas F1, a marker of well-conducted fermentations, becomes the most intense after roasting. RP-HPLC-ESI(-)-HRMS/MS analysis performed on a procyanidin A2 model medium after 12 h at 90 °C revealed many more degradation products than those identified in fermented cocoa, including the last epimer of A2, A2 open structure intermediates (m/z 577), and oxidized A-type dimers (m/z 573).

Procyanidin A2 and Its Degradation Products in Raw, Fermented, and Roasted Cocoa 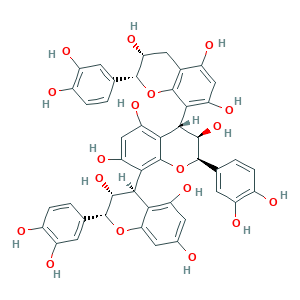 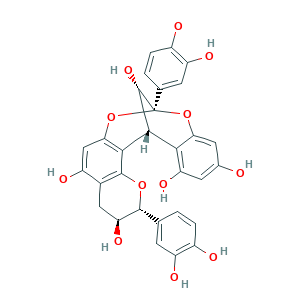 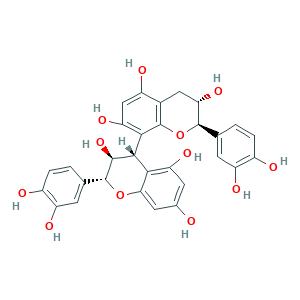 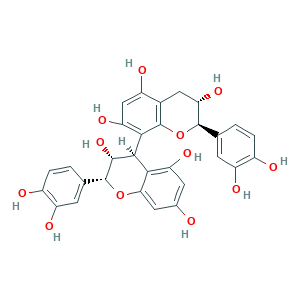 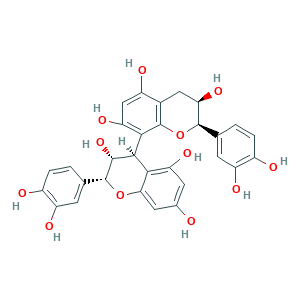 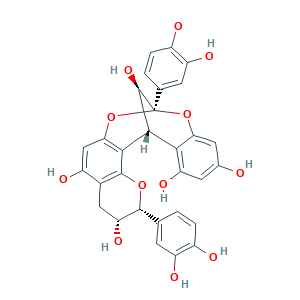