Cryptorchidism, the failure of one or both testes to descend to an extra-abdominal location during mammalian development, is a common reproductive malady that often requires surgical intervention to remedy. Leydig cells are responsible for producing insulin-like peptide 3 (INSL3), a peptide hormone that is essential for normal testicular descent. The insl3 promoter in Leydig cells can be activated by cAMP through the transcription factor Nur77, which also regulates the promoters of the steroidogenic enzymes, cyp17 and 3β-hsd. While the mechanism of LH action on testosterone production is well characterized, the effect of LH on insl3 abundance has not been described. The MA-10 Leydig cell line was used to test the hypothesis that abundance of insl3 mRNA is increased by LH/CG via the cAMP pathway. Cells treated with hCG had a transient robust increase in abundance of nur77 mRNA, while insl3 mRNA abundance remained unchanged. Further, while cAMP addition increased nur77 mRNA abundance, it failed to affect insl3 mRNA. Inhibition of LH-receptor-linked signal transduction pathways in the presence of hCG implicated multiple signaling networks in the regulation of both the insl3 and nur77 genes. Treatment with hCG and cAMP also increased abundance of cyp17 mRNA but not 3β-hsd. Abundance of insl3 mRNA was not affected by hCG, testosterone or the combination of hCG and testosterone. Collectively, these results provide support for the constitutive regulation of insl3 mRNA abundance in the MA-10 Leydig cell line rather than acute regulation by LH/CG and cAMP.

Background: Biosynthesis of leukotriene (LT) by arachidonic acid involves 5-lipoxygenase (5-LO) as an important precursor. Here, we evaluated the role of pseudohypericin (PHP) for its postulated 5-LO inhibitory activity along with a Cys-LT receptor antagonist zafirlukast (ZFL) against inflammatory response and tissue injury in mice.

Materials and methods: The spinal injury was induced by two-level laminectomy of T6 and T7 vertebrae. The inflammation was assessed by histology, inflammatory mediators by enzyme-linked immunosorbent assay, apoptosis by Annexin-V, FAS staining, terminal deoxynucleoti-dyltransferase-mediated UTP end labeling (TUNEL) assay and expression of Bax and Bcl-2 by Western blot. Effect on motor recovery of hind limbs was evaluated for 10 days postinjury.

Conclusion: The present study confirmed 5-LO antagonist activity of PHP and established its neuroprotective role along with ZFL.

Monoamine oxidase (MAO) catalyzes the oxidative deamination of amines and neurotransmitters and is involved in mood disorders, depression, oxidative stress, and adverse pharmacological reactions. This work studies the inhibition of human MAO-A by Hypericum perforatum, Peganum harmala, and Lepidium meyenii, which are reported to improve and affect mood and mental conditions. Subsequently, the antioxidant activity associated with the inhibition of MAO is determined in plant extracts for the first time. H. perforatum inhibited human MAO-A, and extracts from flowers gave the highest inhibition (IC50 of 63.6 μg/mL). Plant extracts were analyzed by HPLC-DAD-MS and contained pseudohypericin, hypericin, hyperforin, adhyperforin, hyperfirin, and flavonoids. Hyperforin did not inhibit human MAO-A and hypericin was a poor inhibitor of this isoenzyme. Quercetin and flavonoids significantly contributed to MAO-A inhibition. P. harmala seed extracts highly inhibited MAO-A (IC50 of 49.9 μg/L), being a thousand times more potent than H. perforatum extracts owing to its content of β-carboline alkaloids (harmaline and harmine). L. meyenii root (maca) extracts did not inhibit MAO-A. These plants may exert protective actions related to antioxidant effects. Results in this work show that P. harmala and H. perforatum extracts exhibit antioxidant activity associated with the inhibition of MAO (i.e., lower production of H2O2). 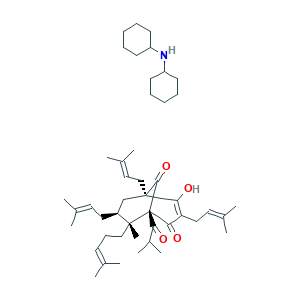 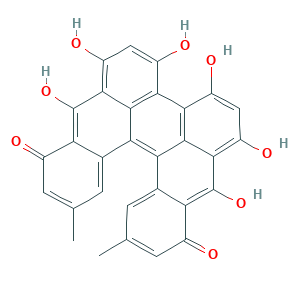 Protohypericin Item Number: BD-D0775 Specification : For Reference Standard and R&D, Not for Human Use Directly.CAS: 548-03-8 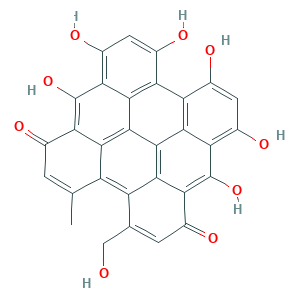 Pseudohypericin Item Number: BD-P0180 Specification : For Reference Standard and R&D, Not for Human Use Directly.CAS: 55954-61-5 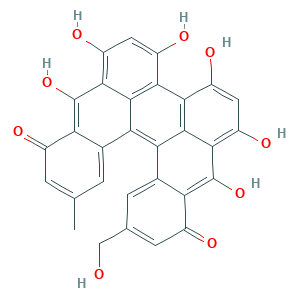 Protopseudohypericin Item Number: BD-P0008 Specification : For Reference Standard and R&D, Not for Human Use Directly.CAS: 54328-09-5