AIMS:
Vinegar-baked Radix Bupleuri (VBRB) potentiates the activity of anticancer drugs in the liver by increasing their hepatic distribution. However, this phenomenon may be associated with drug transporters. We investigated the effect of saikosaponin b2 (SSb2; the main component of VBRB) on the activity and expression of different drug transporters in both normal cells and those that overexpress the transporter.

SIGNIFICANCE:
SSb2 might potentially be the key active component of VBRB that enhances the hepatotargeting of anticancer drugs through the inhibition of multidrug resistance-associated drug transporters (Pgp, MRP1, and MRP2) in an environment-dependent manner.

Saikosaponin b2 enhances the hepatotargeting effect of anticancer drugs through inhibition of multidrug resistance-associated drug transporters.

BACKGROUND:
Hepatitis C virus (HCV) is a major causative agent of chronic hepatitis, cirrhosis, and hepatocellular carcinoma. The rapid progress in the development of direct-acting antivirals has greatly elevated the cure rate to ≥95% in recent years. However, the high cost of treatment is not affordable to patients in some countries, necessitating the development of less expensive treatment.

METHODS:
We adopted a cell culture-derived HCV system to screen a library of the pure compounds extracted from herbs deposited in the chemical bank of the National Research Institute of Chinese Medicine, Taiwan.

RESULTS:
We found that saikosaponin B2 inhibited viral entry, replication, and translation. Saikosaponin B2 is a plant glycoside and a component of xiao-chai-hu-tang, a traditional Chinese herbal medicine extracted from the roots of Bupleurum falcatum. It also inhibited daclatasvir-resistant mutant strains of HCV, especially in combination with daclatasvir.

CONCLUSION:
Our results may aid the development of a new combination therapy useful for patients with HCV who are intolerant or refractory to the currently available medications, including pegylated interferon and direct-acting antiviral agents.

Antiviral effect of saikosaponin B2 in combination with daclatasvir on NS5A resistance-associated substitutions of hepatitis C virus.

Saikosaponin b2 (SSb2) can be extracted from Bupleurum spp. roots (Radix Bupleuri), which belongs to the Umbelliferae family. The current study aimed to explore the effects of SSb2 on proliferation of breast cancer cells and to identify the mechanism by which SSb2 affects breast cancer cell migration. mRNA expression levels of STAT3 and vasodilator‑stimulated phosphoprotein (VASP) were determined and increased expression was observed in 16 breast cancer tissues compared with the paracancerous tissues. MTT, wound healing, colony formation assays and western blot suggested that SSb2 inhibited MCF‑7 proliferation and migration. It was further identified by western blot analysis that SSb2 treatment reduced levels of phosphorylated STAT3, VASP, matrix metallopeptidase (MMP) 2 and MMP9 in MCF‑7 compared with the untreated cells. In addition, it was demonstrated that inhibition of STAT3 phosphorylation decreased VASP expression levels and induction of STAT3 phosphorylation increased VASP levels. Furthermore, it was observed that the treatment of Kunming mice with SSb2 at 30 mg/kg/day for 30 days induced no obvious changes in the liver or kidney tissues, as determined by haematoxylin and eosin staining. In conclusion, these results indicated that SSb2 may be a potential antitumor drug for the treatment of breast cancer, which acts by suppressing proliferation and migration by downregulating the STAT3 signalling pathway and inhibiting the expression of VASP, MMP2 and MMP9 expression.

Antitumor effects of saikosaponin b2 on breast cancer cell proliferation and migration.

Saikosaponin B2 is an active component from Bupleurum kaoi root, acts as an entry inhibitor against HCV infection[1]. Anti-cancer activity[2]. 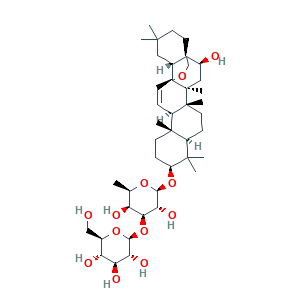 Saikosaponin E Item Number: BD-H0037 Specification : For Reference Standard and R&D, Not for Human Use Directly.CAS: 64340-44-9 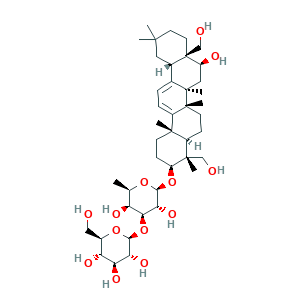 Saikosaponin G Item Number: BD-D1203 Specification : For Reference Standard and R&D, Not for Human Use Directly.CAS: 99365-19-2 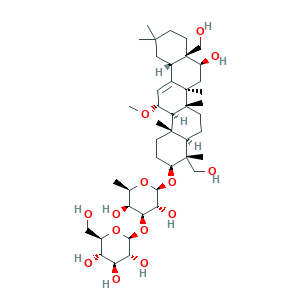 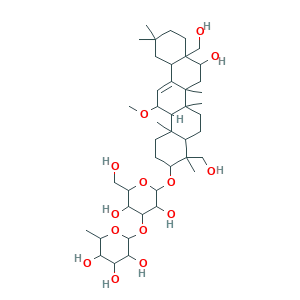 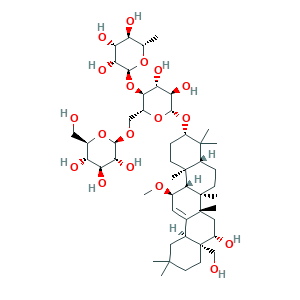 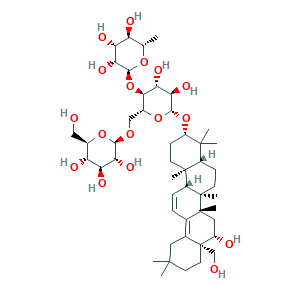 Saikosaponin H Item Number: BD-P0162 Specification : For Reference Standard and R&D, Not for Human Use Directly.CAS: 91990-63-5 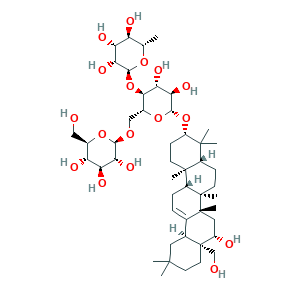 Saikosaponin F Item Number: BF-S4007 Specification : For Reference Standard and R&D, Not for Human Use Directly.CAS: 62687-63-2 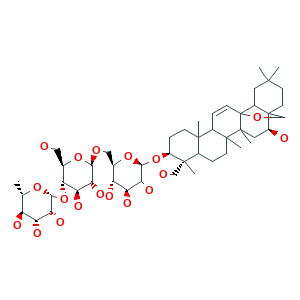 Saikosaponin C Item Number: BF-S2015 Specification : For Reference Standard and R&D, Not for Human Use Directly.CAS: 20736-08-7 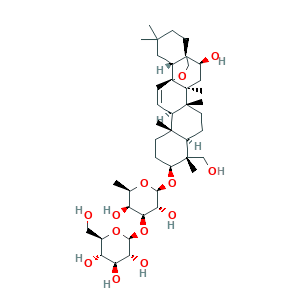 Saikosaponin A Item Number: BF-S1002 Specification : For Reference Standard and R&D, Not for Human Use Directly.CAS: 20736-09-8