Objectives: The cholinergic-adrenergic hypothesis of mania and depression states that depression is characterized by an increase in central cholinergic activity relative to noradrenergic tone. Scopolamine is a centrally acting competitive inhibitor of the muscarinic cholinergic receptor site. This review seeks to find all available data investigating scopolamine as an antidepressant.
Methods: A systematic review of all the published and unpublished or ongoing literature was conducted via Ovid MEDLINE. Keywords used for the search were “scopolamine hydrobromide” in association with one of the following: “depression,” “antidepressive agents,” “depressive disorder,” “depression, chemical,” and “affect.” PubMed was also searched using “scopolamine” (all fields) and “antidepressant” (all fields) or “depression” (all fields).
Results: A small study with elderly patients failed to show a statistically significant improvement in depression when measured at 120 minutes after infusion. A second small, well-controlled study using intramuscular scopolamine showed a small but statistically significant improvement in depression on the morning after the second dose was received. Two double-blind randomized placebo-controlled crossover trials with intravenous scopolamine 4.0 μg/kg infusions showed a significant improvement in depressive symptoms seen as soon as 3 days after the first treatment. Further data analyses showed a greater antidepressant effect in women, significant improvements in bipolar depression, and 85% success rates predicting who will respond to treatment.
Conclusions: Scopolamine is an effective and rapid antidepressant in both unipolar and bipolar depression, working as quickly as 3 days after initial infusion. Independent replication would greatly enhance the literature.

Scopolamine as an Antidepressant: A Systematic Review

We investigated the behavioral effects of scopolamine on rats that bar pressed for trains of electrically stimulating pulses under concurrent variable interval schedules of reward. For the first half of the session (30 min) a 1:4 ratio in the programmed number of stimulation trains delivered at each option was in effect. At the start of the second half of the session, an unsignaled reversal in the relative train number (4:1) occurred. We tracked the relative magnitude of reward estimated for each contiguous pair of reinforced visits to competing options. Scopolamine hydrobromide led to a reduction in the relative magnitude of reward. A similar result was obtained in a follow-up test in which relative magnitude was manipulated by varying the pulse frequency of stimulation, while equating the train number at each option. The effect of scopolamine hydrobromide could not be attributed to undermatching, side bias, nor to an effect of scopolamine on the reward integration process. When the same rats were treated with scopolamine methylbromide, no effects on matching behavior were observed. Our results suggest a cholinergic basis for the computation of choice variables related to matching behavior. (PsycINFO Database Record
(c) 2017 APA, all rights reserved).

The alkaloid L-(-)-scopolamine [L-(-)-hyoscine] competitively inhibits muscarinic receptors for acetylcholine and acts as a nonselective muscarinic antagonist, producing both peripheral antimuscarinic properties and central sedative, antiemetic, and amnestic effects. The parasympatholytic scopolamine, structurally very similar to atropine (racemate of hyoscyamine), is used in conditions requiring decreased parasympathetic activity, primarily for its effect on the eye, gastrointestinal tract, heart, and salivary and bronchial secretion glands, and in special circumstances for a CNS action. Therefore, scopolamine is most suitable for premedication before anesthesia and for antiemetic effects. This alkaloid is the most effective single agent to prevent motion sickness. Scopolamine was the first drug to be made commercially available in a transdermal therapeutic system (TTS-patch) delivering alkaloid. Recently, pharmacokinetic data on scopolamine in different biozlogic matrices were obtained most efficiently using liquid chromatographic-tandem mass spectrometric (LC-MS/MS) or gas chromatography online coupled to mass spectrometry. Pharmacokinetic parameters are dependent on the dosage form (oral dose, tablets; parenteral application; IV infusion; SC and IM injection). Scopolamine has a limited bioavailability if orally administered. The maximum drug concentration occurs approximately 0.5 hours after oral administration. Because only 2.6% of nonmetabolized L-(-)-scopolamine is excreted in urine, a first-pass metabolism is suggested to occur after oral administration of scopolamine. Because of its short half-life in plasma and dose-dependent adverse effects (in particular hallucinations and the less serious reactions, eg, vertigo, dry mouth, drowsiness), the clinical use of scopolamine administered orally or parenterally is limited. To minimize the relatively high incidence of side effects, the transdermal dosage form has been developed. The commercially available TTS-patch contains a 1.5-mg drug reservoir and a priming dose (140 microg) to reach the steady-state concentration of scopolamine quickly. The patch releases 0.5 mg alkaloid over a period of 3 days (releasing rate 5 microg/h). Following the transdermal application of scopolamine, the plasma concentrations of the drug indicate major interindividual variations. Peak plasma concentrations (Cmax) of approximately 100 pg/mL (range 11-240 pg/mL) of the alkaloid are reached after about 8 hours and achieve steady state. During a period of 72 hours the plaster releases scopolamine, so constantly high plasma levels (concentration range 56-245 pg/mL) are obtained, followed by a plateau of urinary scopolamine excretion. Although scopolamine has been used in clinical practice for many years, data concerning its metabolism and the renal excretion in man are limited. After incubation with beta-glucuronidase and sulfatase, the recovery of scopolamine in human urine increased from 3% to approximately 30% of the drug dose (intravenously administered). According to these results from enzymatic hydrolysis of scopolamine metabolites, the glucuronide conjugation of scopolamine could be the relevant pathway in healthy volunteers. However, scopolamine metabolism in man has not been verified stringently. An elucidation of the chemical structures of the metabolites extracted from human urine is still lacking. Scopolamine has been shown to undergo an oxidative demethylation during incubation with CYP3A (cytochrome P-450 subfamily). To inhibit the CYP3A located in the intestinal mucosa, components of grapefruit juice are very suitable. When scopolamine was administered together with 150 mL grapefruit juice, the alkaloid concentrations continued to increase, resulting in an evident prolongation of tmax (59.5 +/- 25.0 minutes; P < 0.001). The AUC0-24h values of scopolamine were higher during the grapefruit juice period. They reached approximately 142% of the values associated with the control group (P < 0.005). Consequently, the related absolute bioavailabilities (range 6% to 37%) were significantly higher than the corresponding values of the drug orally administered together with water (range 3% to 27%). The effect of the alkaloid on quantitative electroencephalogram (qEEG) and cognitive performance correlated with pharmacokinetics was shown in studies with healthy volunteers. From pharmacokinetic-pharmacodynamic modeling techniques, a direct correlation between serum concentrations of scopolamine and changes in total power in alpha-frequency band (EEG) in healthy volunteers was provided. The alkaloid readily crosses the placenta. Therefore, scopolamine should be administered to pregnant women only under observation. The drug is compatible with nursing and is considered to be nonteratogenic. In conclusion, scopolamine is used for premedication in anesthesia and for the prevention of nausea and vomiting associated with motion sickness. Pharmacokinetics and pharmacodynamics of scopolamine depend on the dosage form. Effects on different cognitive functions have been extensively documented.

Pharmacokinetics and Pharmacodynamics in Clinical Use of Scopolamine

Scopolamine hydrobromide is a high affinity (nM) muscarinic antagonist. 5-HT3 receptor-responses are reversibly inhibited by Scopolamine with an IC50 of 2.09 μM. 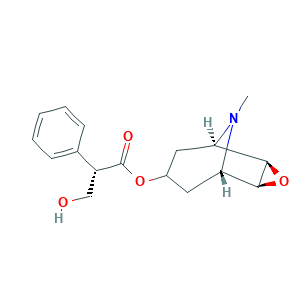 Scopolamine Item Number: BD-D0708 Specification : For Reference Standard and R&D, Not for Human Use Directly.CAS: 51-34-3 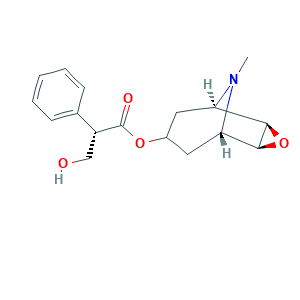 Scopolamine hydrobromide Item Number: BF-S4008 Specification : For Reference Standard and R&D, Not for Human Use Directly.CAS: 114-49-8 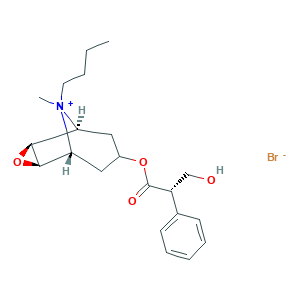 Scopolamine butylbromide Item Number: BF-S2001 Specification : For Reference Standard and R&D, Not for Human Use Directly.CAS: 149-64-4