Sennoside B is a specific dianthrone compound extracted from senna, which is widely used as a stimulant laxative but has potential side effects. This study aimed to obtain the metabolic and pharmacokinetic data of sennoside B. The metabolic profiles of sennoside B were obtained from rat plasma, urine, bile and feces by an ultra-performance liquid chromatography quadrupole time-of-flight mass spectrometry (UPLC-Q-TOF-MS). As a result, 14 metabolites were structurally identified and the proposed metabolic pathways of sennoside B included hydrolysis to aglycones, release of rhein-type anthrone, and extensive conjugation. As the only compound detected in the plasma samples after intravenous and intragastric administrations, the prototype was selected as the plasma marker in the pharmacokinetic study. A simple and sensitive ultra-performance liquid chromatography-tandem mass spectrometry (UPLC-MS/MS) method was developed for the quantitation of sennoside B in rat plasma. The linear range of sennoside B was 5-1000 ng/mL (R2 ≥ 0.991) and the lowest limit of quantification (LLOQ) was 5 ng/mL. The intra- and inter- precisions of the assay were less than 10%, whereas accuracy ranged from 85.80% to 103.80%. The extraction recovery, matrix effect and stability of sennoside B were within acceptable limits. The established method was well validated and successfully applied to the pharmacokinetic study of sennoside B. The oral absolute bioavailability of sennoside B was calculated as 3.60% and the value apparent volume of distribution of intravenous and intragastric administrations were 32.47 ± 10.49 L/kg and 7646 ± 1784 L/kg, respectively. The maximum plasma concentrations were 212.6 ± 50.9 μg/L and 14.06 ± 2.73 μg/L for intravenous and intragastric dosing groups, respectively. According to the current results of pharmacokinetic and metabolic profiling studies, metabolites with high abundance in tissues would be the next object in the pharmacokinetic study of sennoside B.

Osteosarcoma is a mesenchymally derived, high-grade bone sarcoma that is the most frequently diagnosed primary malignant bone tumor. Today, chemoprevention is regarded as a promising and realistic approach in the prevention of human cancer. Previous studies have suggested ellagic acid (EA) and Sennoside B have potential in this regard. The aim of the present study was to elucidate the anti-osteosarcoma effects of EA and Sennoside B by using Saos-2 and MG63 osteosarcoma cells. It was identified that EA or Sennoside B treatment could inhibit the growth, migration and invasion of the cells, and induce G1 cell cycle arrest by repressing the transcription of c-Jun. These results may provide a cellular basis for the application of EA or Sennoside B in the treatment of patients with osteosarcoma.

Ellagic Acid and Sennoside B Inhibit Osteosarcoma Cell Migration, Invasion and Growth by Repressing the Expression of c-Jun

Sennoside B is an anthraquinone glycoside, found in large quantities in leaves and pods of Senna (Cassia angustifolia)[1]. Sennoside B can inhibit PDGF-stimulated cell proliferation by binding to PDGF-BB and its receptor and by down-regulating the PDGFR-beta signaling pathway[2]. 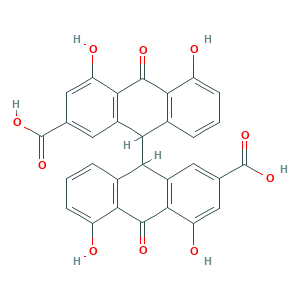 Sennidin A Item Number: BD-H0063 Specification : For Reference Standard and R&D, Not for Human Use Directly.CAS: 641-12-3 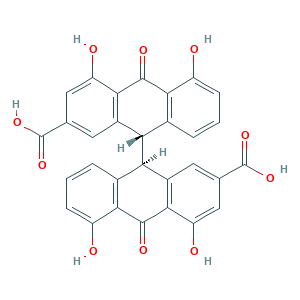 Sennidin B Item Number: BD-H0064 Specification : For Reference Standard and R&D, Not for Human Use Directly.CAS: 517-44-2 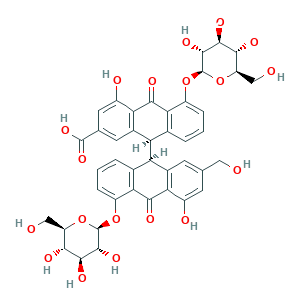 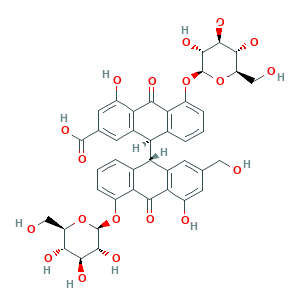 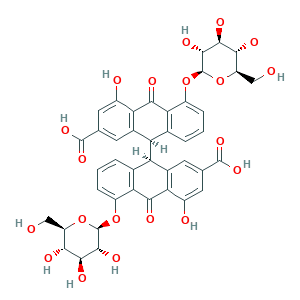 Sennoside A Item Number: BF-S2016 Specification : For Reference Standard and R&D, Not for Human Use Directly.CAS: 81-27-6 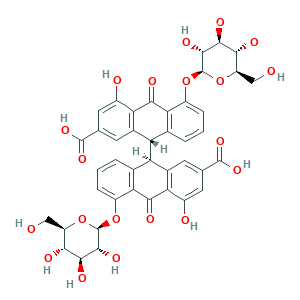 Sennoside B Item Number: BF-S2017 Specification : For Reference Standard and R&D, Not for Human Use Directly.CAS: 128-57-4