Aims: The aim was to isolate, identify and characterize endophytes from Solanum nigrum L. as a new source of the cytotoxic steroidal alkaloid solamargine.
Methods and results: Three endophytic fungi; SNFSt, SNFL and SNFF were isolated from S. nigrum and identified by molecular methods. Preliminary TLC screening showed a common metabolite between the plant and one of these fungi, SNFSt which was identified as Aspergillus flavus based on the phylogenetic analysis of its ITS sequence. Subsequent LC-HRESIMS analysis unambiguously established the identity of the compound based on its molecular formula and its characteristic MS(2) fragmentation pattern as solamargine. To ascertain its identity, fungal solamargine was isolated using preparative TLC and its structure was fully characterized using NMR spectroscopic techniques and high-resolution mass spectrometric analysis. Solamargine production could be followed and quantified for a total of 11 generations of this fungus with a titer of ~250-300 μg l(-1) . This study represents one of the first examples where host plant-derived compounds have been demonstrated to be steadily produced by an endophytic fungi in sizeable quantities.
Conclusions: The production of solamargine (found in the host plant) by a cultivable fungal endophyte at a significant yield is a new observation. Further experiments such as media optimization, OSMAC (One Strain Many Compounds) or epigenetic modifiers could be applied to enhance the fungal solamargine production.
Significance and impact of the study: The endophytic fungus SNFSt isolated from S. nigrum may be utilized for quantitative production of the potent cytotoxic metabolite solamargine.

Solamargine Production by a Fungal Endophyte of Solanum Nigrum

Background: Solanum aculeastrum fruits are used by some cancer sufferers as a form of alternative treatment. Scientific literature is scarce concerning its anticancer activity, and thus the aim of the study was to assess the in vitro anticancer and P-glycoprotein inhibitory potential of extracts of S. aculeastrum fruits. Furthermore, assessment of the combinational effect with doxorubicin was also done.
Methods: The crude extract was prepared by ultrasonic maceration. Liquid-liquid extraction yielded one aqueous and two organic fractions. Bioactive constituents were isolated from the aqueous fraction by means of column chromatography, solid phase extraction and preparative thin-layer chromatography. Confirmation of bioactive constituent identity was done by nuclear magnetic resonance and ultra-performance liquid chromatography mass spectrometry. The crude extract and fractions were assessed for cytotoxicity and P-glycoprotein inhibition in both cancerous and non-cancerous cell lines using the sulforhodamine B and rhodamine-123 assays, respectively.
Results: Both the crude extract and aqueous fraction was cytotoxic to all cell lines, with the SH-SY5Y neuroblastoma cell line being most susceptible to exposure (IC50 = 10.72 μg/mL [crude], 17.21 μg/mL [aqueous]). Dose-dependent P-glycoprotein inhibition was observed for the crude extract (5.9 to 18.9-fold at 100 μg/mL) and aqueous fraction (2.9 to 21.2 at 100 μg/mL). The steroidal alkaloids solamargine and solanine were identified. While solanine was not bioactive, solamargine displayed an IC50 of 15.62 μg/mL, and 9.1-fold P-glycoprotein inhibition at 100 μg/mL against the SH-SY5Y cell line. Additive effects were noted for combinations of doxorubicin against the SH-SY5Y cell line.
Conclusions: The crude extract and aqueous fraction displayed potent non-selective cytotoxicity and noteworthy P-glycoprotein inhibition. These effects were attributed to solamargine. P-glycoprotein inhibitory activity was only present at concentrations higher than those inducing cytotoxicity, and thus does not appear to be the likely mechanism for the enhancement of doxorubicin’s cytotoxicity. Preliminary results suggest that non-selective cytotoxicity may hinder drug development, however, further assessment of the mode of cell death is necessary to determine the route forward.

Solamargine is a major steroidal alkaloid glycoside extracted from a traditional Chinese medicinal herb, Solanum nigrum L. (SNL); has been shown to inhibit growth and induce apoptosis of various cancer cells. IC50 value:Target: Anticancer natural compoundin vitro: Solamargine reduced HepG2 cell viability in a concentration-dependent manner. At 7.5μM solamargine decreased cell viability by less than 20% in HepG2 cells. At the highest dose, solamargine decreased cell migration and invasion by more than 70% and 72% in HepG2 cells, respectively. Western blotting and gelatin zymography results showed that solamargine reduced expression and function of MMP-2 and MMP-9 proteins [1]. SM increased phosphorylation of p38 mitogen-activated protein kinase (p38 MAPK) in a time-dependent fashion. SM also inhibited phosphorylation and protein expression of signal transducer and activator of transcription 3 (Stat3), a transcription factor, which was abrogated by the SB203580, a specific inhibitor of p38 MAPK. In addition, SM induced protein expression of p21, one of cyclin-dependent kinase inhibitors, and this was not observed in cell overexpression of Stat3 or cells treated with SB203580 [2]. SM significantly inhibited the growth of SMMC-7721 and HepG2 cells and induced cell apoptosis. Cell cycle analysis revealed that SM caused cell cycle arrest at the G2/M phase. Moreover, SM could up-regulate the expression of caspase-3 [3]. 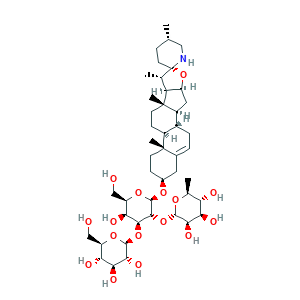 Alpha-Solamarine Item Number: BD-R0029 Specification : For Reference Standard and R&D, Not for Human Use Directly.CAS: 20318-30-3 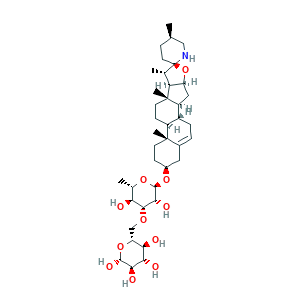 alpha-Solanine Item Number: BD-D0391 Specification : For Reference Standard and R&D, Not for Human Use Directly.CAS: 20562-02-1 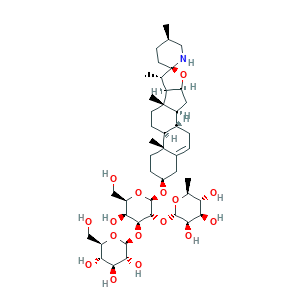