Aim: Sweroside is an iridoid glycoside with diverse biological activities. In the present study we investigated the effects of sweroside on α-naphthylisothiocyanate (ANIT)-induced cholestatic liver injury in mice.
Methods: Mice received sweroside (120 mg·kg(-1)·d(-1), ig) or a positive control INT-747 (12 mg·kg(-1)·d(-1), ig) for 5 d, and ANIT (75 mg/kg, ig) was administered on d 3. The mice were euthanized on d 5, and serum biochemical markers, hepatic bile acids and histological changes were analyzed. Hepatic expression of genes related to pro-inflammatory mediators and bile acid metabolism was also assessed. Primary mouse hepatocytes were exposed to a reconstituted mixture of hepatic bile acids, which were markedly elevated in the ANIT-treated mice, and the cell viability and expression of genes related to pro-inflammatory mediators were examined.
Results: Administration of sweroside or INT-747 effectively ameliorated ANIT-induced cholestatic liver injury in mice, as evidenced by significantly reduced serum biochemical markers and attenuated pathological changes in liver tissues. Furthermore, administration of sweroside or INT-747 significantly decreased ANIT-induced elevation of individual hepatic bile acids, such as β-MCA, CA, and TCA, which were related to its effects on the expression of genes responsible for bile acid synthesis and transport as well as pro-inflammatory responses. Treatment of mouse hepatocytes with the reconstituted bile acid mixture induced significant pro-inflammatory responses without affecting the cell viability.
Conclusion: Sweroside attenuates ANIT-induced cholestatic liver injury in mice by restoring bile acid synthesis and transport to their normal levels, as well as suppressing pro-inflammatory responses.

To date, there are very few effective drugs for liver fibrosis treatment; therefore, it is urgent to develop novel therapeutic targets and approaches. In the present research, we sought to study the protective effect of sweroside contained in Lonicera japonica or blue honeysuckle berries in a mouse model of liver fibrosis and investigate the underlying mechanism. The mouse model of liver fibrosis in was induced by intraperitoneal injections of 10% CCl4 for 6 weeks (three times/week). At the beginning of the fourth week, sweroside was intragastrically administered once a day and at the end of the treatment, biochemical and histological studies were investigated. The expression of FXR, miR-29a and the downstream targets were analyzed as well. Moreover, the effect of sweroside on cell proliferation was observed in human hepatic stellate cells (HSCs) (LX-2), along with using the siRNA for FXR and miR-29a inhibitor to investigate the underpinning of the anti-fibrotic effect of sweroside. Sweroside successfully protected the liver fibrosis in CCl4-induced mouse model, accompanied by miR-29a induction. Furthermore, sweroside also induced miR-29a in HSCs, resulting in the inhibition of COL1 and TIMP1. Our data also showed that either silencing miR-29a or knockdown of FXR in LX-2 cell abolished the inhibition of COL1 and TIMP1 as well as the inhibition of cell proliferation by sweroside treatment. In conclusion, sweroside exerted its anti-fibrotic effect in vivo and in vitro by up-regulation of miR-29a and repression of COL1 and TIMP1, which was at least in part through FXR.

Pterocephalus hookeri was used as a traditional Chinese medicine for the treatment of rheumatoid arthritis. Sweroside was a main iridoid isolated from P. hookeri. The present study aimed to investigate the anti-inflammatory effect mechanism of sweroside. In RAW264.7 cells induced by lipopolysaccharide (LPS), the abnormal proliferation, the NO content increase, and the downregulated Sirtuin1 (SIRT1) expression were observed. Sweroside could alleviate the inflammation by inhibiting cell proliferation through arresting the cell cycle at the G0/G1 phase, by suppressing pro-inflammatory cytokines and by promoting anti-inflammatory cytokines in LPS-induced RAW264.7 cells. Further mechanism research indicated that sweroside could activate the SIRT1, then suppress the nuclear factor-kappa B (NF-κB) and promote the Forkhead transcription factor O1 (FOXO1) signaling pathways. The present study indicated that sweroside may be the main anti-inflammatory constituent of P. hookeri and a promising candidate for anti-inflammation therapy.

Modulation effects of sweroside isolated from the Lonicera japonica on melanin synthesis PUMID/DOI：26051519 Chem Biol Interact. 2015 Aug 5;238:33-9. In the course of screening for the melanogenesis inhibitors, Sweroside was isolated from Lonicera japonica. Its chemical structure was determined on the basis of spectroscopic analysis, including mass spectroscopy and nuclear magnetic resonance analysis. Sweroside inhibited potent melanogenesis in melan-a cells at 300μM without cytotoxicity. Also, Sweroside decreased tyrosinase, tyrosinase-related protein-1 (TRP-1) and TRP-2 protein production in melan a cells. To identify the signaling pathway of Sweroside, the ability of Sweroside to influence Akt and extracellular signal-regulated protein kinase (ERK) activation was investigated. Sweroside induced Akt and ERK in a dose-dependent manner. In addition, the specific inhibition of the Akt and ERK signaling pathways were studied by specific inhibitor LY294002 and U0126, respectively and it was causing the increased melanin synthesis. Furthermore, Sweroside presented inhibition of the body pigmentation and tyrosinase activity in zebrafish in vivo model. These results suggest that Sweroside isolated from L. japonica may be an effective skin-whitening agent through the regulates the expression of MAP kinase and melanogenic enzymes. Protective effects of sweroside on human MG-63 cells and rat osteoblasts. PUMID/DOI：23201331 Fitoterapia. 2013 Jan;84:174-9. Herbal Fructus Corni is a folk medicine with a long history of safe use for treating osteoporosis in postmenopausal women or elderly men in Asia. Sweroside is a bioactive herbal ingredient isolated from Fructus Corni, which has been widely used for the treatment of osteoporosis in traditional Chinese medicine (TCM). Unfortunately, the working mechanisms of this compound are difficult to determine and thus remain unclear. The aim of the study was performed to determine the potential molecular mechanism of the anti-osteoporotic effect of Sweroside on the human MG-63 cells and rat osteoblasts. 3-(4,5-dimethylthiazol-2-yl)-2,5-diphenyltetrazolium bromide (MTT) test was used to observe the effect of Sweroside on cell proliferation. The activity of alkaline phosphatase (ALP) and the amount of osteocalcin were also assayed the cell differentiation. Sweroside significantly increased the proliferation of human MG-63 cells and rat osteoblasts (P<0.01). It increased the activity of ALP, and osteocalcin was also elevated in response to Sweroside (P<0.05). Of note, flowcytometer assay showed that Sweroside can attenuate and inhibit apoptosis. Sweroside has a direct osteogenic effect on the proliferation and differentiation of cultured human MG-63 cells and rat osteoblasts in vitro. These data will help in understanding the molecular mechanisms of therapeutic efficacy of Sweroside, and highlight insights into drug discovery. In the current study, Sweroside has been suggested to be a promising osteoporosis therapeutic natural product. Determination of sweroside in rat plasma and bile for oral bioavailability and hepatobiliary excretion. PUMID/DOI：19122321 Chem Pharm Bull (Tokyo). 2009 Jan;57(1):79-83. Sweroside is an active ingredient of iridoid glycoside isolated from the flower buds of Lonicera japonica THUNB. A quantitative HPLC-UV method was developed for monitoring Sweroside in rat plasma, urine, feces and bile. The method was successfully applied for a basic pharmacokinetic study. The obtained data of pharmacokinetics were applied to evaluate the oral bioavailabilities of Sweroside and the active ingredients of purified herbal extracts (IGEs-1). The absolute bioavailability was estimated to F(Sweroside) 0.31% and F(IGEs-1) 0.67%. The majority of Sweroside excreted to feces revealed one reason of the low oral bioavailability. The values of F(IGEs-1) much higher than that of F(Sweroside) reveals that ingredients in IGEs-1 such as loganin, secoxyloganin and some phenolic acids may promote the absorption of Sweroside. The study of hepatobiliary excretion was achieved by an in vivo microdialysis sampling method after intravenous administration of Sweroside. The percentage of accumulation of free form Sweroside in bile duct was 31.2+/-7.2% of the total dosage. It may be one reason why Sweroside possesses strong hepatoprotective effect. Gentiopicroside and sweroside from Veratrilla baillonii Franch. induce phosphorylation of Akt and suppress Pck1 expression in hepatoma cells PUMID/DOI：27248905 Biochem Cell Biol. 2016 Jun;94(3):270-8. Here, we analyzed the effects of an ethanol extract from V. baillonii (VBFE) on the expression levels of the cytosolic form of the phosphoenolpyruvate carboxykinase gene (Pck1) mRNA and components of the insulin signalling cascade in HL1C hepatoma cells. Compared with the insulin control, VBFE treatment inhibited the expression of Pck1 mRNA in a dose-dependent manner. This was associated with the phosphorylation of Akt and Erk1/2 in a time-dependent manner. Further analysis of the purified components of VBFE indicated that gentiopicroside and Sweroside from VBFE, alone and in combination, suppressed Pck1 expression and induced Akt and Erk1/2 phosphorylation. In conclusion, gentiopicroside and Sweroside suppress Pck1 expression and induce phosphorylation of components in the insulin signalling cascade. This is the first study to demonstrate that gentiopicroside and Sweroside show insulin-mimicking effects on the regulation of Pck1 expression. Further studies are warranted to explore the potential of gentiopicroside and Sweroside in the control of blood glucose in animals. 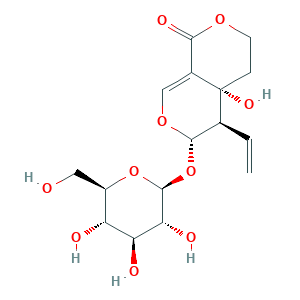 Swertiamarine Item Number: BD-D1372 Specification : For Reference Standard and R&D, Not for Human Use Directly.CAS: 17388-39-5 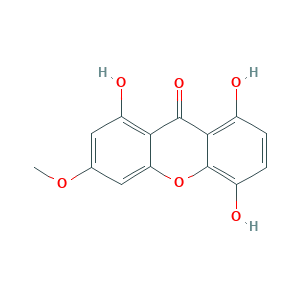 Bellidifolin Item Number: BD-D1224 Specification : For Reference Standard and R&D, Not for Human Use Directly.CAS: 2798-25-6 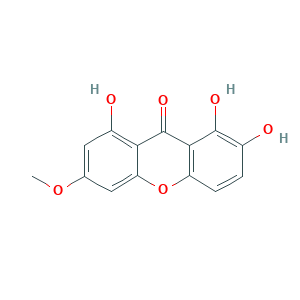 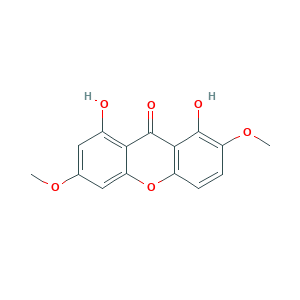 Methylswertianin Item Number: BD-D0425 Specification : For Reference Standard and R&D, Not for Human Use Directly.CAS: 22172-17-4 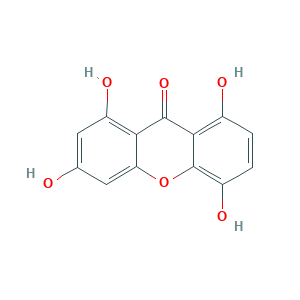 Demethylbellidifolin Item Number: BD-P0977 Specification : For Reference Standard and R&D, Not for Human Use Directly.CAS: 2980-32-7 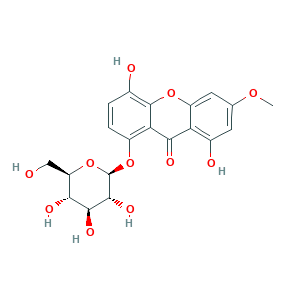 Swertianolin Item Number: BD-P0972 Specification : For Reference Standard and R&D, Not for Human Use Directly.CAS: 23445-00-3